Dancehall set to ‘blow up’ in a big way, says Hanna

Stylish over Bridgez … During Celebrity Clash at Famous nightclub 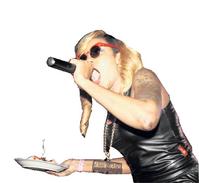 The Celebrity Clash between dancehall artistes Bridgez and Stylysh was filled with excitement last Thursday, as they deejays sought to outdo each other on the wheels of steel.

The event, Magnum All Star Million Dollar Face-Off, saw Bridgez – an artiste managed by Bounty Killer, and Stylysh – who is signed to Guzu Music operated by Tommy Lee Sparta, both being selectors for the first time. However, it was hard to tell based on the quality of songs they played and their ability to win the support of the audience.

Bridgez went first after the coin toss and kicked off the juggling segment with reggae selections including Buju Banton’s Psalm 23, Dennis Brown’s Here I Come and Bob Marley’s Natural Mystic.

Stylysh then entered the stage carrying a plate of food for Bridgez. According to the deejay, Bridgez sounded hungry and therefore she brought the badly needed food for her.

She started her set with an intro that fell flat, however, she quickly picked up momentum, pulling for classic songs like Solid As A Rock by Sizzla, Untold Stories by Buju Banton and One Blood by Junior Reid.

She would soon have the audience eating from the palm of her hands, and by the sound of the echoing vuvuzelas, it was clear she was destined to win the juggling round. “Watch how mi a guh kill har wid har boss,” Stylish said before playing Bounty Killer’s War Yu Want which also got a strong response from the audience.

“People she sey mi move from father (Vybz Kartel) to the son (Tommy Lee Sparta) but ladies one man cyah sey yu tan good. Yu haffi move from Heckle and Jeckle till one sey sekkle,” she shouted to roaring fans.

At the end of the round, the judges admitted that the females surpassed their expectations and gave the round to Stylysh who also won an extra point for crowd response.

Next was the 45 round and Bridgez played Tommy Lee Sparta’s Dem Nuh Bad, Shabba’s None a Dem and Sizzla’s Karate.

Stylysh responded with Mad Cobra’s Press Trigger, Vybz Kartel and Jahvinci’s Wey Dem A Guh and So Sick by Aidonia and Suhverto.

The judges said they were thoroughly entertained and also gave this round to Stylysh who had the crowd in her corner despite a good display by Bridgez.

The dub-for-dub round was next, and Bridgez started with her manager Bounty Killer’s Dead This Time which was well received. However, Stylysh erased that response courtesy of a damaging Major Mackerel dubplate … “gentle Jesus meek and mild is that a gorilla or somebody’s child,” was the dubplate Mackerel sang and this had the place in a frenzy.

Bridgez showed that she was a quick thinker and responded with another Major Mackerel, proclaiming that Stylysh was Mud Up. She too got a good response.

However, Stylysh’s response courtesy of a feisty Twin of Twins Up Wid Di Money dubplate, again had vuvuzelas going off inside Famous nightclub.

At the end of the exciting round, the judges commended both females for an entertaining display. However, at the end of deliberations, Stylysh came out on top with no objections from the audience.

For the original report go to http://jamaica-star.com/thestar/20131202/ent/ent1.html