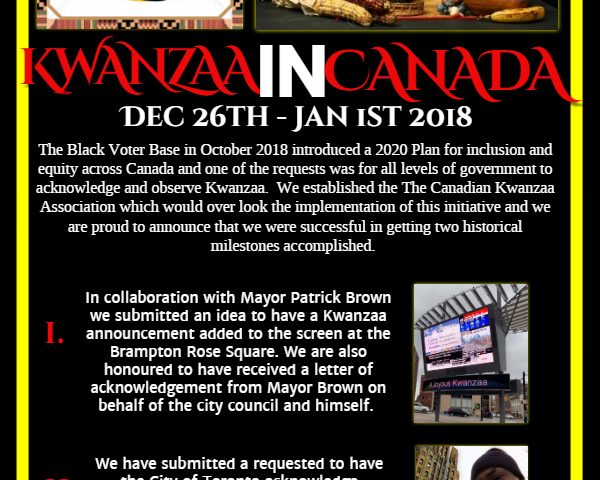 Toronto, Canada, January 1st — Kwanzaa is a pan-African holiday which celebrates family, community and culture and was created by Dr. Maulana Karenga in 1966 in the United States. It is celebrated from December 26–January 1 by millions of people across the African diaspora. It’s roots are based in harvest or ‘first fruit’ festivals which are celebrated all over Africa. This is when people would come together and celebrate and give thanks for the good things in their lives and communities.

Kwanzaa was created to introduce and reinforce seven basic values of African culture which contribute to building and reinforcing family, community and culture among African American people as well as Africans throughout the world African community. These values are called the Nguzo Saba which in Swahili means the Seven Principles. The Nguzo Saba stands at the heart of the origin and meaning of Kwanzaa, for it is these values which are not only the building blocks for community but also serve to reinforce and enhance them. Each day, one of these principles are celebrated and is represented by the lighting of 1 of 7 candles which sits on a Kinara.

The Canadian Kwanzaa Association is proud to have secured the first Canadian proclamation for Kwanzaa week by any municipality and also credits Brampton’s mayor Patrick Brown for issuing an acknowledgment. Per the request of the CKA, Mayor Brown also adding a Joyous Kwanzaa message to the digital board at Brampton’s Rose Square.

To mark the 52nd anniversary of Kwanzaa the 3D Toronto sign in front of Toronto City Hall will be lit Red, Black and Green in the same pattern of the 7 candles, 3 red on the left, a black in the center and the last 3 are green. On the last day of Kwanzaa all 7 candles are lit and the illuminated Toronto sign will represent that from Jan 1st 9am until Jan 2nd 9am.

On Jan 1st at 5pm until 5:45pm we have a special ceremony which will take place at the Peace Garden at Nathan Phillips Square and then head over to the sign for a community photo. At the peace garden we will have special speakers and performers such as Norman Di Pasquale Toronto Catholic District School Board trustee and trustee rep on the African Canadian Committee and multi talented, Amani, who will perform.