BMO Launches Business Within Reach: BMO for Black Entrepreneurs and Commits $100 million in loans to Help Black-led Businesses Start up, Scale up, and Grow

The team helming the redevelopment of the Stocker Street Creative (SSC) project in Baldwin Hills is excited to announce its platinum sponsorship for the opening night festivities of the 30th annual Pan African Film Festival (PAFF). Pictured left to right is Jessica Sarowitz of 4S Bay Partners LLC and Stan Washington of Pantheon Business Consulting LLC.

LOS ANGELES, Feb. 15, 2022 /PRNewswire/ — The team helming the redevelopment of the Stocker Street Creative (SSC) project in Baldwin Hills is excited to announce its platinum sponsorship for the opening night festivities of the 30th annual Pan African Film Festival (PAFF). 4S Bay Partners LLC, based in Chicago, along with its Los Angeles-based property management and project development consulting team, Pantheon Business Consulting LLC, readies to kick off a memorable night of Black culture at PAFF in a global celebration of Pan African culture during Black History Month. 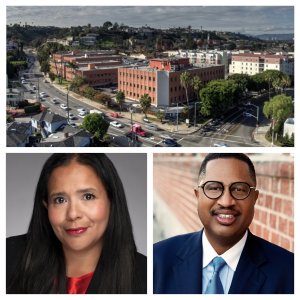 The team helming the redevelopment of the Stocker Street Creative (SSC) project in Baldwin Hills is excited to announce its platinum sponsorship for the opening night festivities of the 30th annual Pan African Film Festival (PAFF). Pictured left to right is Jessica Sarowitz of 4S Bay Partners LLC and Stan Washington of Pantheon Business Consulting LLC.

“As a multi-racial woman of color, an immigrant, and a social impact investor, I am committed to projects that help level the playing field by providing economic development and growth to underserved communities around the country,” said Jessica Sarowitz, founder and managing partner of 4S Bay Partners LLC. “At 4S Bay, we look for projects that will contribute to changing structural racism and inequalities, as well as build a wealth-base ecosystem where all members of it can prosper.” She added, “Stocker Street Creative will be an inclusive place where members of the local creative community can develop projects that tell their own stories authentically, and without diffusion.”

The vision of SSC is to create a community-focused creative campus, consisting of entertainment, technology, and TV/film production studios. 4S Bay Partners has assembled a local diverse African American project team, comprised of development and design experts from within the community, that is working to make SSC one of the most innovative and exciting projects “reimagining” the Baldwin Hills Crenshaw Boulevard Corridor. The plan is to remodel, construct, and transform a 5.12 acre block along Stocker Street, which currently consists of medical, nonprofit, and office buildings with the addresses of 3731-3761 and 3701.

With its proximity to Leimert Park, the SSC development will become a centerpiece in an area of South Los Angeles that is considered the center of the community’s creative economy and African American entertainment culture. Upon its anticipated completion in 2024, SSC will be one of the first redevelopment projects of this magnitude in the Los Angeles area.

“As a native Angeleno, raised adjacent to the Baldwin Hills area in View Park and Windsor Hills, I’m excited to help 4S Bay Partners bring this project to our community and leverage the creative energy that exists within the surrounding neighborhoods,” said Stan Washington, president and CEO of Pantheon Business Consulting.

“During our project-planning charrette last fall, we received significant feedback from the community on the site yield study as well as our proposed community and economic benefits strategy,” stated Sherri Franklin, founder of Urban Design Center and the project’s community development consultant.  “The input helped us to frame our design concepts for the development project, and we’re excited to share it with community stakeholders during the design charrette presentations throughout February and March 2022.”

Sponsoring PAFF, gives 4S Bay Partners the perfect opportunity to introduce SSC to the entertainment and creative community. There is a synergy between the missions of both 4S Bay Partners and PAFF, which serve to amplify creative voices in underserved communities. Through the years, PAFF has stood as a pillar in the diverse Black community, welcoming filmmakers from across the world to showcase their pride, their voices, and their unique stories.

“For 30 years, the Pan African Film Festival has been plugged into Black culture and has not only given Black creatives a platform to showcase their impressive work, but also, a seat at the table in reaching Hollywood and Nollywood,” remarked Washington of Pantheon Business Consulting.

“We are honored to support this exemplary festival and look forward to celebrating the work of the all the artists involved,” added Sarowitz of 4S Bay Partners.

PAFF is the largest Black film festival in the United States and the largest Black History Month cultural event in the nation. Every year, hundreds of filmmakers, fine artists, and unique craftspeople from more than 40 countries and six continents converge in Los Angeles to showcase their work. Annually, PAFF showcases more than 190 new high-quality Black films from the United States, Africa, the Caribbean, South America, Europe, the South Pacific, Canada and increasingly, Asia. Most importantly, the Academy of Motion Picture Arts and Sciences (AMPAS) has designated PAFF as an official qualifying film festival for live action and animation short films.

This year, the festival will kick off Black History Month with a virtual “Best of PAFF” Retro Series to be held February 15 – 28, 2022.

Also, the festival with a hybrid of in-theatre screenings and a live ArtFest exhibit, along with virtual streaming presentations will run from

April 19 through May 1, 2022. Screenings will be held at the Cinemark 15 Theatres, located at the Baldwin Hills Crenshaw Plaza in Los Angeles. (The theatre is situated on the corner of Martin Luther King Jr. Boulevard and Crenshaw Boulevard.)