Konshens Talks New Shoe Line, Taking His Career To The Next Level [VIDEO]

TARRUS RILEY – “TO THE LIMIT” 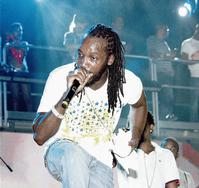 We the Best recording artiste Mavado leads out the Center Forward rhythm for DJ Frass Records with the grimy street hit, ‘Carpet‘. Mavado’s opening lines: ‘mouth a move, but mi caan hear nothing’ is already a hit slang in the streets.

Dancehall’s most visible superstar, I Octane, has carved out a reputation for his impressive body of incredible songs and he does not disappoint with Yute Fi Have Ting. He delivers the best get-money song for 2013 when he sings: ‘money haffi a swing like Sammy Sosa/When mi tell yu bout cream, anno Nadinola’.

Perhaps the biggest song on the rhythm is the combination, Bad Man Ova Yah Suh, where Mavado teams up with his protégé, 3 Star to deliver one of the biggest ‘bad man songs’ for 2013. This song is already a big hit on sound systems in Jamaica and in the dances.

The biggest underground hit on this riddim is Singa J’s Counter, which is a huge hit in the underground dancehall market in New York, Connecticut and New Jersey where sound systems have been requesting numerous dubs for this song directed at men who choose, a particular lifestyle.

Widely regarded as one of The Game’s greatest lyricists, Assassin has fun with Get Mad, where he will have the girls going loco in the dance, while Tifa shows why she is dancehall’s newest star with the brilliantly delivered Got It Like That. Her rhymes are tight, and she changes her flow every eight bars, and her sing-a-long hook is going to be a definite hit among the young dancehall crowd.

Cobra follows up his huge hit on the Pop Style rhythm with another radio hit for DJ Frass. This time, he shows he has equal prowess with ‘girl songs’ with the witty Da Sumpen Deh with its risqué tongue-in-cheek references, and double entendres.

Chris Martin will have the girls singing along with Single Ladies, while Cecile taps into that late 90s club vibe withRegular. Demarco is an artiste who has no parallel when it comes to hardcore street dances, and he shows why on Owna Don, where he declares that “no man can programme him, and he makes his own choices”. Bun up, bun up!

Other standout songs include Gully Squad frontman Chase Cross with the brash, hard-hitting Dem A Pree, and G Star shows he is on the way to Prosperity.

Flippa Maffia is his brilliant flossing best with Season To Season where he shows that he can never tire of his jetsetting, champagne-spilling lifestyle, and he keeps finding interesting ways to describe his nights of excess in the dancehalls of Jamaica to the USA.

Flexx really enjoys deejaying and you can hear the joy in his voice as he spits Naaana, a song that the dancehall girls are going to love, while Shack Live celebrates Mi Life.

For the original report go to http://jamaica-star.com/thestar/20131007/ent/ent4.html