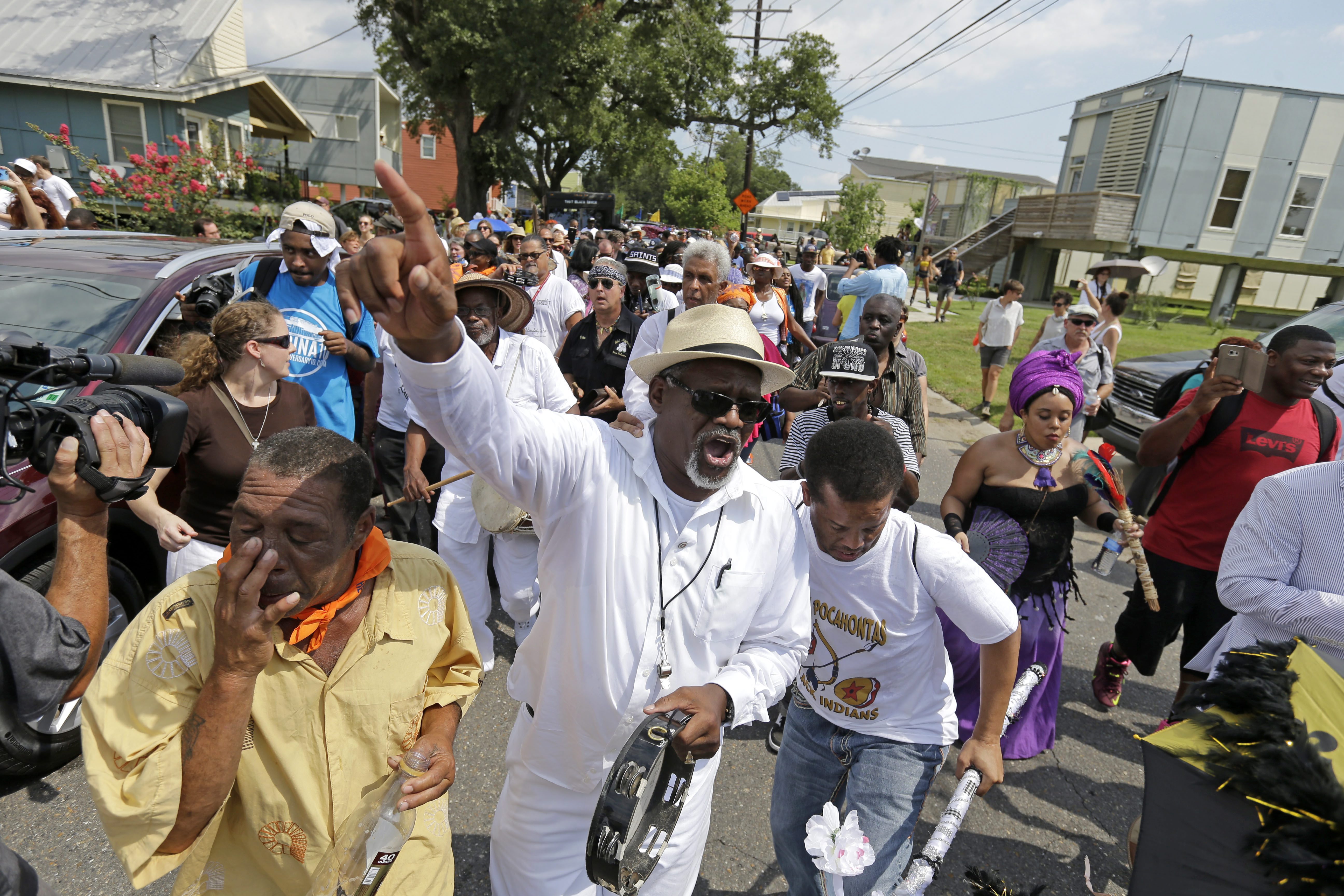 By Rebecca Santana And Kevin McGill

NEW ORLEANS _ The Gulf Coast and New Orleans observed the 10th anniversary of Hurricane Katrina, one of the deadliest storms in American history, in ways both devout and festive. Church bells rang and brass bands played as people across the storm-ravaged coast remembered the past and looked to the future.

The storm killed more than 1,800 people and caused $151 billion in damage, in one of the country’s worst natural disasters. Many of the dead were from New Orleans where levees protecting the city burst, submerging 80 per cent of the Crescent City in water.

The dead and those who still struggle to rebuild were not far from anyone’s thoughts Saturday, from Mississippi where church bells rang out to mark when the storm made landfall to a commemoration at the New Orleans memorial containing bodies of people never claimed or never identified.

As the church bells rang, 80-year-old Eloise Allen wept softly into a tissue as she leaned against her rusting Oldsmobile.

“I feel guilty,” said Allen, whose house in Bay St. Louis, Mississippi, was damaged but inhabitable after the storm. “I didn’t go through what all the other people did.”

Saturday was a day to remember what “all the other people” went through. Those who were lifted from rooftops by helicopters, those who came home to find only concrete steps as evidence of where their house used to be, those whose bodies were never claimed after the storm.

But the mourning Saturday was balanced by a celebration of how far the region has come.

At the Smoothie King Center in New Orleans, thousands of people gathered to take part in an evening of prayer, music and speeches including by former President Bill Clinton. He had helped raise money for Katrina victims.

He weighed into a debate that has bubbled up during the Katrina anniversary about whether New Orleans’ post-Katrina story is one of a city resurrected or of people left behind. Tourism in the Crescent City is booming, real estate prices have skyrocketed and the city’s population continues to grow after Katrina. But the recovery has been uneven with many neighbourhoods _ especially African-American ones _ still struggling. Clinton said the city should be happy and celebrate its progress but at the same time keep working.

“Have a good time New Orleans. You earned it,” Clinton said. “And tomorrow wake up and say ‘Look at what we did. I bet we can do the rest too.”’

In Biloxi, Mississippi, clergy and community leaders gathered at a newly built minor league baseball park for a memorial to Katrina’s victims and later that evening the park hosted a concert celebrating the recovery.

During a prayer service at a seaside park in Gulfport, former Mississippi Gov. Haley Barbour praised volunteers who had worked on the Katrina recovery. He said more than 954,000 volunteers came from around the country to Mississippi in the first five years after the storm, and many were motivated by faith.

“They thought it was God’s command to try to help people in need,” Barbour said.

Glitzy casinos and condominium towers have been rebuilt. But overgrown lots and empty slabs speak to the slow recovery in some communities.

In New Orleans’ Lower 9th Ward, residents and community activists gathered Saturday at the levee where Katrina’s storm waters broke through and submerged the neighbourhood.

Once a bastion of black home ownership, it still hasn’t regained anywhere near its pre-Katrina population. But a day of events illustrated how attached the residents who have returned are to their community.

After the speeches were done, a parade snaked through the neighbourhood while music played from boom boxes and people sold water from ice chests under the hot sun.

Clarence Davis’ family home was four blocks from the levee. He evacuated before Katrina and eventually returned to the region, but now lives in the suburbs. He came back Saturday just to find old faces from the neighbourhood but he couldn’t bring himself to see the vacant lot where his house used to be.

“The family home is what kept us together and it’s gone,” he said. His family is scattered now in Houston, Atlanta and Louisiana as are many of his neighbours.

In a city where people form strong bonds over neighbourhoods, from the Lower 9th Ward, to Broadmoor, to Gentilly and Lakeview, many choose to stay local on Saturday in one of the many neighbourhood events across the city.

“New Orleans will always be in my blood,” a silver-haired Juanita Fields said Saturday in what was the badly flooded Pontchartrain Park, an African-American neighbourhood near Southern University New Orleans.

She recounted her post-Katrina experiences _ fear and thirst in a sweltering Superdome, eventual transport to Kansas _ with humour, grace and at times defiance. She finally returned in 2012. She is happy about the city’s recovery, but not about the unevenness of that recovery that saw the city’s poorest suffer. She believes some “grieved themselves to death,” over the destruction and their inability to return or rebuild.

But she’s optimistic that the city will continue to recover. “It will. It’s going to take us a while.”