Ulric Cross, a Pan-African hero you should know 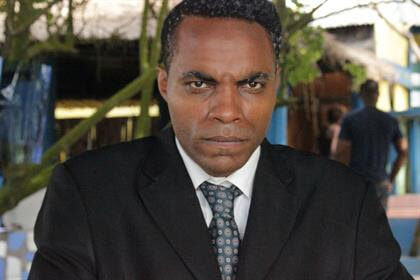 He is known as  possibly the most decorated West Indian of World War II, but Trinidadian jurist and diplomat Ulric Cross was also a profound figure in three African nations’ independence. Now, acclaimed Caribbean filmmaker Frances-Anne Solomon’s biopic on him is screening at the Durban International Film Festival, writes Grethe Kemp.

We follow him from his upbringing in Trinidad, where his mother died before he went to university and his father abandoned the family, to his time as a Royal Air Force navigator for Britain during the war against Adolf Hitler.

His heroic achievements earned him some of Britain’s most distinguished accolades.

After the war he became a lawyer, a lecturer and a producer for the BBC. After a conversation with influential Trinidadian historian, journalist and socialist CLR James, Cross decided to go to Ghana, to be of service to the newly independent country.

We spoke to Solomon about her much praised film about Cross.

Why the decision to create a biopic about Ulric Cross?

It was the dying wish of a family friend that a film be made about his friend and colleague Ulric Cross – that is why I came on board to help get it made. And [that is] how my journey with the film began.

Cross was the most decorated West Indian of World War 2, but do you feel he ever received proper recognition for his role in the independence projects of so many African nations?

In those days we did not recognise as heroic the actions and activities of those who went to Africa to help during that period.

It was part of our colonial thinking that Africa was a backwater, uncivilised place, so we rather celebrated European service, for example in World War 2.

However, Ulric is recognised in the history books of Cameroon for his contributions as the first attorney-general of independent Cameroon. In 2011 the Cameroon government awarded him a special honour.

Tell me a bit about the style of the documentary. I think the re-enactment of events by actors worked very well. What prompted you to use this format?

It is part of my process that since our history as black people and Caribbean people has not been recorded in the colonial narrative, my job as a storyteller and truth teller is to recreate, remember and reclaim that past and return us to our rightful place in world history.

That is why I often use archives and intercut it with dramatisations in order to put black people back into our stories.

Ghana, Cameroon and Tanzania started out with such promise, and yet the potential they showed then didn’t come to fruition. Do you know how Cross might have felt about that in his later years?

It is important to understand the colonial and external forces that were determined to undermine the liberation movements from the beginning.

They killed democratically elected leaders so they could retain control of Africa’s resources for their own ends and not in the interests of Africans.

As someone who saw that process take place first hand, Ulric would have been aware of that. It is a tragedy that the dream of a united states of Africa failed.

During the independence movement that swept across the continent, there were nefarious forces that wanted the African independence project to fail. Do you think African nations still struggle with outside forces that exploit and hamper growth?

The forces of greed and capitalism are still very much at work.

The documentary serves as a warning to us now to be on guard, to pick up the baton in order to further the important work begun by ancestors, learning from their experiences and their failure [and] understanding the forces raging against true liberation and equality.

These are questions and debates that are very much alive in South Africa now.