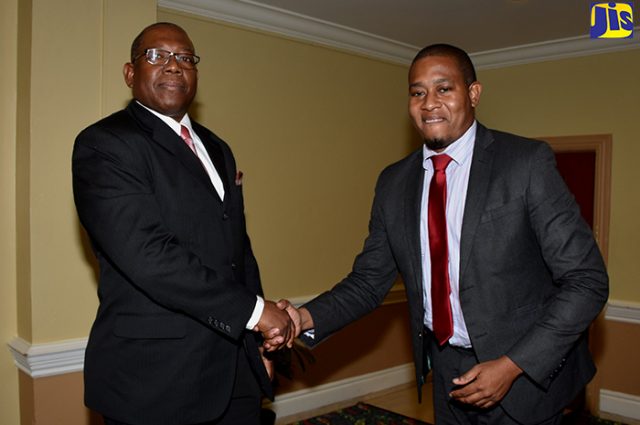 State Minister in the Ministry of Education, Youth and Information, Hon. Floyd Green, has called on local universities to ensure that the degree programmes being offered are in keeping with the country’s development goals, the Government’s economic priorities, and are on par with the very best international standards.

Delivering greetings at the University Council of Jamaica’s (UCJ) sixth annual Dr. Dennis Irvine Lecture Series at The Knutsford Court Hotel in St. Andrew on October 19, Mr. Green said that as the nation becomes more developed and careers change, universities should adjust their programmes to match jobs that are currently available and will be accessible to upcoming graduates.

“We have to ensure that our tertiary programmes are relevant, and that we are not constantly training our young people in areas that are not aligned to the Government’s economic priorities,” he emphasised.

He said that amidst a world of constant change and the desire to bring more trained personnel into the workforce, the country cannot afford to allow the push for more to dilute the commitment to high-quality training.

“The UCJ has not done that over the past 30 years, and neither can they afford to do so now. Let us all recommitted ourselves to the ideals of the UCJ and to ensuring that Jamaica’s tertiary institutions are providing programmes and training that are on par with the very best international standards,” the State Minister urged.

He challenged the universities to ensure that the programmes they are offering to students now, will result in them being employed immediately after completing degrees at the tertiary level.

“There are some tertiary institutions which have an 80 per cent placement rate when our young people are finished, and there are others where a number of young people are at home with degrees, with a difficulty in finding gainful employment. That is a reality that we have to treat together as we craft our future for Jamaica,” Mr. Green said.

Meanwhile, President, Northern Caribbean University (NCU), Dr. Lincoln Edwards, who was the guest speaker at the Lecture Series, said the universities have to be mindful that the offerings of the institutions depend on the demands of the students, who are their customers, with ideas of the offerings on the job market.

“Students have an eye on the job market and the skills and competencies which will position them strongly for employment. As universities respond to the growing range of demands and opportunities, and to increase in competition, they will need to become more diverse. Individual institutions must seek to occupy functional niches where there is a good match between their particular strengths and the market opportunities that exist,” Dr. Edwards said.

He added that universities also need to pay attention to globalisation to influence the directions they take regarding their degree offerings, which are in keeping with international standards.

“The growth in globalisation requires explicit attention to international quality assurance in education that will enable our people to maximise their potential and enable national development to the highest possible level. In order to be competitive, our universities and colleges must focus special attention on designing and implementing new quality-assurance mechanisms and systems in order to ensure that students receivehigh-quality and relevant education, and that the degrees and diplomas they offer are widely recognised,” Dr. Edwards said.

The Lecture Series is held in honour of the late Chairman, UCJ, Dr. Dennis Irvine, who was a distinguished educator who contributed significantly to tertiary education nationally, regionally and internationally for more than 50 years.

He served the Council as Chairman for 11 years. He was appointed as the Council’s first Chairman and served from 1987-1989. He was later reappointed in 1996 and held the position up to the time of his passing.