Venomus ‘gives thanks’ in new single 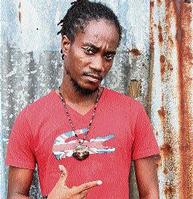 Up-and-coming entertainer Venomus shows his appreciation for life in his latest single, ‘Give Thanks’.

The young artiste, who found some amount of success from the chart-topping One Drop single, in which he was featured along with QQ, is determined that despite all the struggles of life, he’ll still give thanks.

Venomus admits that he never experienced his fair share of the spotlight with One Drop, but he still presses on with his musical career. He addresses this among other topics in Give Thanks, which was produced by Ikation Records.

A music video for the single has been done and is set for release on local and overseas television stations soon. “The video depicts my life and all the struggles that I’ve endured, as well as what other youths from the inner cities of Jamaica have been through. It’s a real video and song that people can relate to, because it’s life and we have to give thanks for life,” said Venomus.

He is busy in the studio working on new songs and also preparing for upcoming shows, among which include the popular Sting stage show.

“I’m booked for Sting, so I’ll just go and give it my best. I’ll be there with the whole Stashment family, so just look out for Venomus on the rise,” he shared.

Venomus is also working with the Canadian-based record label Indie Rootz Records. Songs, videos and several shows are currently on his agenda.

For the original report go to http://jamaica-star.com/thestar/20131202/ent/ent3.html