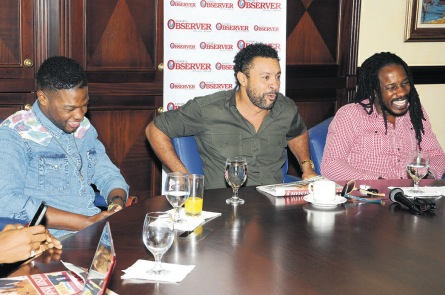 On December 17 when host Carson Daly announced Tessanne Chin as the winner of the NBC talent contest The Voice, Jamaicans here and in the diaspora jubilantly celebrated her victory.

But even while many acknowledged that Chin is a phenomenally talented singer, it took a massive mobilisation campaign, led by Orville ‘Shaggy’ Burrell, to get people to vote for her.

Yesterday, Shaggy, who was responsible for getting Chin to audition for the contest, told reporters and editors at the weekly Jamaica Observer Monday Exchange how he conducted his campaign.

According to the deejay, he hit panic mode when he noticed that American contestant Matthew Schuler was atop iTunes with his rendition of Hallelujah while Chin was nowhere to be seen on the chart.

“It was a time when she was getting very bad song choices; that’s the time when I started panicking and I called [Usain] Bolt and said ‘Yow, mi need yuh fi tweet. Ah call everybody a know,” said Shaggy.

“I remember calling Lennox Lewis and wake him up and said ‘Don, Tessanne is in trouble; mi need yuh and him seh ‘yes, yes, mi on board, man’ and he went ahead and hype.”

Shaggy was not the only one calling, as Chin’s manager and longtime Shaggy confidante Sharon Burke also went into high gear and called West Indies cricketer Chris Gayle who, in turn, called CNN late night anchor Piers Morgan, who tweeted “Beat dem bad@Tessanne!#Jamaica#Voice” after Chin’s awesome performance of Whitney Houtson’s I Have Nothing on December 16.

The extent of Shaggy’s efforts also stretched to country and western megastar Kenny Chesney. “I said, I need you to tweet; and he was like, ‘tweeting, what’s that?!” Shaggy related to much laughter.

“At that point I just said, Yow, we gotta change this ’cause it was serious. I was like, no, she can’t come this far and get eliminated, and we just started calling every single radio person that I know,” he said.

It helped that at the time he was promoting his Out Of Many One Music album, which was released in September this year. As such, Shaggy contacted disk jockeys from American radio stations whom he had brought to Jamaica for the Rae Town leg of the album launch.

“These are guys who have radio stations that have millions of people as listeners, so calling in a favour from them would have helped, especially in the Jamaican diaspora,” the deejay said.

With more than four million people in the diaspora, Shaggy said he told his protégé Chin that she could not come out the loser.

“If you lose, the worst that can happen is that you can have the diaspora on your side and yuh start mek and sell record,” Shaggy said he told Chin.

“They have friends, and friends of friends, a so it go, but is to mobilise them, ’cause at one point the Jamaicans were just cheering and not purchasing or voting. Dem just a say yeah Tessie!” he said.

For the original report go to http://www.jamaicaobserver.com/entertainment/Shaggy-tells-how-he-mobilised-the-Tessanne-votes_15712735