A spokesman for Haitian presidential contender Jude Celestin says the No. 2 candidate will participate in a runoff only if 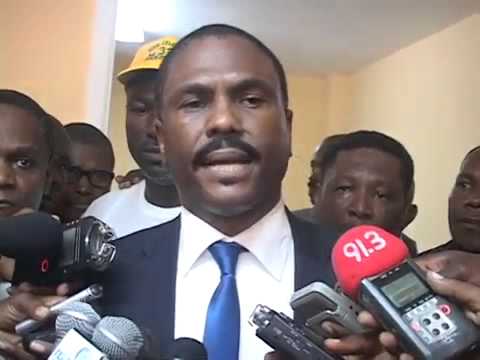 PORT-AU-PRINCE, Haiti _ A spokesman for Haitian presidential contender Jude Celestin said Thursday that the second-place candidate will participate in an upcoming runoff only if sweeping changes recommended by a special commission are adopted to improve voting.

Campaign spokesman Gerald Germain said Celestin has been urging Haiti’s outgoing president to ensure that the commission’s recommendations are put in place before the two-candidate presidential runoff. They include major changes to the electoral machinery, with investigations and possible resignations of those accused of corruption, and political dialogue to achieve consensus about the next round.

“Only when the recommendations are implemented would Mr. Celestin take part,” German said in a phone interview.

While Haiti’s Provisional Electoral Council has pledged to improve transparency for the final round, commission spokesman Rosny Desroches said he has seen very little progress to solve electoral tensions since the special panel’s recommendations were released Sunday.

For instance, he noted that President Michel Martelly this week issued a decree making Jan. 24 the new date for the postponed runoff without first holding a political dialogue with those involved in the electoral impasse, a key recommendation.

“For now, there is apparently no will to hold even a minimal dialogue,” Desroches said.

The United Nations, the U.S. government and representatives of other nations making up the “Core Group” that monitors Haiti have urged state institutions and political actors to “take all steps necessary to ensure a peaceful transfer of power to a newly elected president” by the Feb. 7 constitutional deadline.

On Wednesday, U.S. State Department Counselor Thomas Shannon and the U.S. special co-ordinator for Haiti visited the country and met with a number of people, including the two presidential candidates slotted for the Jan. 24 runoff. It is unclear what, if anything, was accomplished. The pair departed Thursday.

U.S. Ambassador Peter Mulrean, who participated in the meetings, said that he would not divulge specifics but that conversations with both presidential candidates focused on the challenges facing Haiti, their visions for the future and “a bit about where they stood on moving ahead with the second round.”

“I can tell you that we certainly hope that he (Celestin) will participate and that the elections will move forward,” Mulrean told The Associated Press.

If legitimate elections don’t take place as scheduled Jan. 24, a transitional government might have to be formed in the impoverished country where elections are never easy and suspicions of manipulation and complicity by the Provisional Electoral Council and the government in power are chronic.

The Group of Eight opposition alliance, which is made up of Celestin and seven other presidential candidates, wants the members of the electoral council to resign over what it says is corruption and vote-rigging. It also says a transitional government is needed to complete Haiti’s electoral process in a fair and transparent way.

Celestin has called the official results putting him in second place behind government-backed candidate Jovenel Moise a “ridiculous farce” and refused to campaign for a Dec. 27 runoff that was postponed days before it was scheduled amid swirling allegations of “massive fraud.” He has since demanded 30 days for campaigning before any runoff.

Echoing comments he made to Haiti’s biggest newspaper recently, Mulrean said there has been no evidence to back up the allegations of rampant electoral fraud.

“I have heard many accusations of massive fraud but I have not seen those making the accusations come forward with proof,” the U.S. ambassador said.