At historic summit, Obama seeks to leverage shift on Cuba to re engage with Latin America 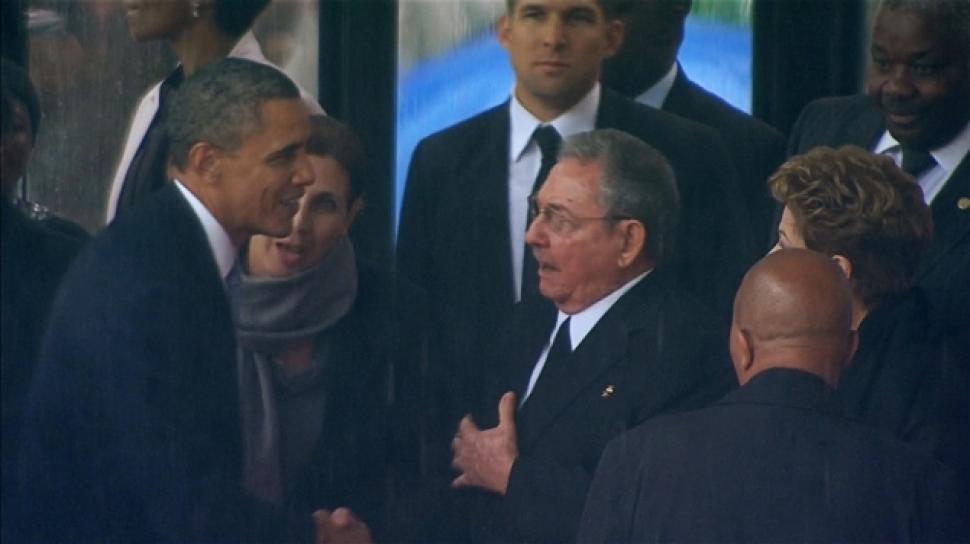 By Joshua Goodman And Peter Orsi

PANAMA CITY _ After his ice-breaking handshake with Cuba’s leader, President Barack Obama is looking to the Summit of the Americas to chart a less conflictive future with Latin America, a region that has long chafed at Washington’s dominance.

The informal encounter before the opening ceremony, together with a surprise message sent by the hugely popular Pope Francis, set expectations for substantive dialogue among the more than 30 regional leaders on Saturday.

The challenges are huge. The title of the seventh edition of the summit is “Prosperity with Equality,” a theme touched on in a letter from the Argentine-born pontiff reminding the region’s leaders that poverty hasn’t fallen as fast as their economies have grown in the past decade’s commodities-fueled run.

“It’s not enough for the poor to pick up the crumbs that fall from the table of the rich,” according to the letter, which was read by the Vatican’s secretary of state, Pietro Parolin. “Direct action for the most vulnerable, just like small children are in a family, should be the priority of those who govern.”

Obama and Raul Castro had clasped hands once before, at the funeral of South African President Nelson Mandela, but expectations are higher this time following Obama’s decision in December to begin talks on restoring relations with Cuba that were severed in 1961.

The U.S. embargo on Cuba, which Obama has talked about possibly dismantling as part of the rapprochement, has long been an obstacle to closer ties with Latin America, where mistrust of the U.S. runs deep following a history of support for coups and military dictatorships.

Obama also touted a decision to request from Congress $1 billion in aid for Central America to speed up development that aims to make streets there safer and reduce the flow of migrants to the U.S.

Amid the focus on the future, the ghosts of the past were close at hand, and some preferred to stir old grudges.

Venezuelan President Nicolas Maduro had barely gotten off his plane before he took a symbolic jab at Washington by visiting a monument honouring victims of the 1989 U.S. invasion of Panama.

A crowd of several hundred, many of them government supporters flown in from Venezuela, greeted the socialist leader at the memorial in the poor downtown neighbourhood of El Chorrillo, which saw the heaviest fighting during the invasion that removed dictator Gen. Manuel Noriega. “Maduro, stick it to the Yankee!” they chanted.

The Venezuelan leader hardened his rhetoric against Washington in the run-up to the summit after the White House slapped financial sanctions on seven senior officials it accuses of human rights abuses tied to last year’s anti-government protests.

Much of the region has rallied to Maduro’s side in denouncing the action by the U.S., which comes amid a deep economic and political crisis in Venezuela. But Maduro’s vow to deliver to Obama a petition signed by 10 million people demanding the sanctions be lifted is unlikely to stand in the way of progress on other hemispheric issues.

As the region’s leaders flew into Panama City, supporters of Castro disrupted for a third day a forum for civil society groups to protest the presence of Cuban dissidents at the meeting.

Castro supporters shouted “Mercenaries!” as they faced off with government opponents who brandished signs such as “Democracy is respect.”

The pro-Castro delegation later walked out of the forum before Obama came to speak, saying they had been forced to share the stage with opposition figures they consider hostile to their country.

Obama urged Cuba to embrace those who think differently.