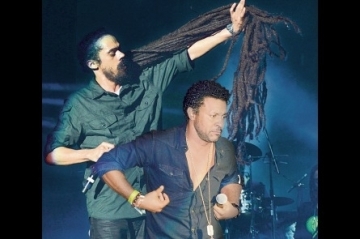 GRAMMY winners Damian ‘Junior Gong’ Marley and Shaggy are among the headliners for the 2014 Raggamuffin Festival in New Zealand.

In a statement released yesterday, festival organisers disclosed that Marley will be joined by three artistes (singers Christopher Ellis, Black-Am-I and Wayne Marshall) from Ghetto Youths International, the label he owns in partnership with brothers Stephen and Julian.

The promoters note the significance of Marley’s second appearance at the festival.

“It will be particularly special to have Damian performing in New Zealand in the week of his father’s birthday and marking 35 years since Bob Marley’s historic performance at Western Springs which really gave birth to the reggae movement in this country and was the inspiration for the movie Mt Zion,” they said in the release.

For the original report go to http://www.jamaicaobserver.com/entertainment/Big-cast-for-Raggamuffin-fest-_15166641