Today, Mayor John Tory announced the winning proposal for the Joshua Glover Public Art Competition is by Quentin VerCetty, a young Black artist, storyteller and educator who was born and raised in Rexdale, Etobicoke in Toronto. 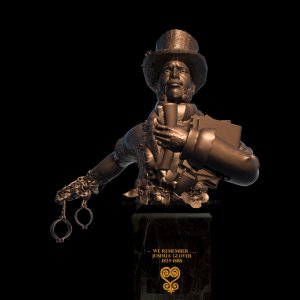 Joshua Glover arrived in Canada in 1854 via the Underground Railroad after escaping slavery in the United States. After settling in Lambton Mills, Etobicoke, he was employed at Montgomery’s Inn, now a City Museum, and his story helped to propel the abolitionist movement.

The new Joshua Glover Park where the sculpture will be installed is a City park currently under construction as part of the Kingsway by the River development in Etobicoke.

VerCetty’s sculpture draws on composite events of Joshua Glovers’ life through the lens of Afrofuturism. His depiction of Joshua Glover is a charismatic Victorian dandy who gazes confidently into the future while throwing away the crushing chains of slavery with his mutilated cyborg arm. He clutches his books close to his chest knowing that it is knowledge that will set him free and provide the power and spiritual endurance to overcome the indignities and sufferings of the past.

The winning proposal was selected unanimously by a panel comprised of David Chinyama, artist, Julie Crooks, Associate Curator of Photography at the Art Gallery of Ontario, Denise Harris, Chief Historian of the Etobicoke Historical Society, Gaëtane Verna, Director of the Power Plant, and Tim Whiten, artist and Professor Emeritus at York University.

The selection panel chose this artwork because they felt it would resonate with many residents and children, who will see Joshua Glover as their new superhero.

VerCetty is an award-winning visual storyteller, art educator and graduate of Ontario College of Art and Design University. His work uses speculative narratives, such as Afrofuturism, to address issues of representation, immigration and decolonization and has been featured in countries such as Mexico, Haiti, Peru, Australia, United Arab Empire and Germany. Through his work he hopes to engage minds and inspire hearts to help to make the world a better place.

The creation of the Joshua Glover Park and Public Art Memorial aligns with the City’s Confronting Anti-Black Racism Action Plan and specifically the recommendation to increase the visibility of Black history in Toronto. Learn more about the public art competition here: https://www.toronto.ca/explore-enjoy/history-art-culture/public-art/public-art-monuments-collection/public-art-competitions/.

The Joshua Glover Public Art Memorial will be installed in 2021, as part of the City’s ArtworxTO: Toronto’s Year of Public Art, a year-long celebration of art and community in 2021. It will highlight Toronto’s incredible collection of public art and the artists behind it, provide opportunities for artists to develop new public art projects, and encourage people to connect and engage with public art. More information about ArtworxTO is available at http://www.toronto.ca/artworxTO.

“I am proud that one of the first new public art projects to be installed as part of ArtworxTO: Toronto’s Year of Public Art will be this memorial to Joshua Glover by Quentin VerCetty. It is exactly what ArtworxTO was launched to accomplish: more public art across the city that reflects the diversity, dignity and strength of the people who call Toronto home. By commemorating Joshua Glover through this statue, we are recognizing the role that he played in our city’s history and how his actions have impacted the lives of our residents.”
– Mayor John Tory

“The City has recently launched several initiatives to address anti-Black racism, including key cultural and economic investments. Quentin VerCetty’s compelling public art memorial to Joshua Glover reminds us how far we have come and how much work still remains to be done to correct enduring historical wrongs.”
– Deputy Mayor Michael Thompson (Ward 21 Scarborough Centre), Chair of the Economic Development and Culture committee

“As the local Councillor, I am pleased to be able to celebrate Black history in Etobicoke and work with the tireless volunteers at the Etobicoke Historical Society to commemorate a compelling local figure in Toronto’s history.”
– Deputy Mayor Stephen Holyday (Ward 2 Etobicoke-Centre)

“As a born and raised resident of Rexdale, Etobicoke, and as an artist and scholar whose work has focused on the lack of Canadian monuments of people of African descent, I wanted to ensure that this memorial preserves the numerous stories of Glover’s life, and what future generations can learn from it. Using principles of Afrofuturism, my aim is to have an iconic marker that is an embodiment of transitions: a non-human machine that represents Glover’s past as an enslaved person, transforming to regain humanity, with Glover proudly clutching his freedom papers and his books as he gazes off into the uncertainty of tomorrow. The additional meaning of this memorial also marks a moment of allyship, advocacy and activism to improve the treatment of human beings that we can all continue to strive for.”
– Quentin VerCetty

“Etobicoke Historical Society is proud to have initiated this project and partnered with the City of Toronto for the commission of this memorial to Joshua Glover. Glover’s story is important to the history of our city, and especially relevant in these times. There are not enough public memorials that make visible the stories of Black history in Toronto and we are especially happy that this new commission will be installed in a park bearing Joshua Glover’s name.”
– Neil Park, President of the Etobicoke Historical Society