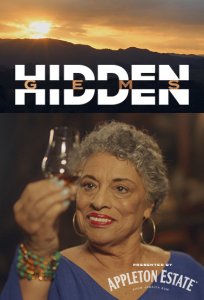 As part of the partnership with Complex Canada, Hidden Gems debuts with a 360-degree marketing strategy amplified by Corus’ powerful megaphone of assets. In addition to long-term presence on complex.ca, the series will also premiere on linear TV in a new Complex-branded programming block on Global, Food Network Canada, and National Geographic running from September 2 – 5. The new programming block opens the series to a wide range of audiences across key demos and will be promoted with one to two-minute commercial elements across Global and select Corus specialty networks. The series will also be promoted across Complex Canada’s Facebook, Instagram, and Twitter platforms with episodic teasers, static images, and a series of custom reels driving to the series.

“To be part of a project that tells and uplifts the stories of Jamaican excellence is something I’m incredibly proud of,” says Joy Spence, Appleton Estate Master Blender. “I can’t wait for audiences to be taken on this journey to meet some truly remarkable Jamaican-Canadian ‘hidden gems’.”

“For advertisers looking to weave their brands into culture and engage audiences authentically, there’s no better place than content,” said Dervla Kelly, Senior Vice President, Marketing & so.da, Corus Entertainment. “A core part of Complex Canada’s editorial focus is to spotlight local trailblazers – be it in food, fashion, culture, music, sports, or entertainment – so partnering with Appleton Estate Rum on Hidden Gems to celebrate the entrepreneurship and innovation from some of our country’s finest Jamaican-Canadian creators was a perfect fit.”

Along for the journey in the series is Appleton Estate Jamaican Rum Master Blender Joy Spence who brings lessons and learnings from her four decades at the Estate. Spence, known as the spirits industry’s first female Master Blender, joins four esteemed Jamaican-Canadian creatives in Hidden Gems including:

Hidden Gems is produced by so.da, Corus’ award-winning social-digital agency, and Mindshare Canada in collaboration with Fela, a production company founded by Taj Critchlow and Director X specializing in making cutting edge content in the realm of music videos, commercials, documentaries and films. Over four episodes, the series will take viewers on a journey to hidden locations in Jamaica, Winnipeg, Montréal, and Toronto, exploring each creative’s inspiration in the places they call home. All episodes will be available online at complex.ca and across Complex Canada social platforms.