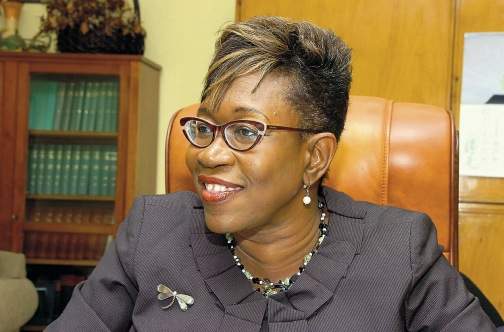 In an unprecedented move the Director of Public Prosecutions (DPP) Ms. Paula Llewellyn has given her opinion so far on the much talked about Ruel Reid and by extension the Caribbean Maritime University (CMU) corruption scandal probe.

The DPP issued a news release which contains 18 or so paragraphs.  She said four attorneys from her office were assigned to assist the Financial Investigation Division (FID) which is charged with the responsibility of probing financial crimes.  A summary of her finding so far  inter alia. The evidence is weak and cannot stand scrutiny.

She chided those speculators whom she referred to as “informed and uninformed commentators who are not helpful to the investigation.  The police et al has primacy as it relates to a final decision… we only give advice.  There is settled law where this position is concerned.  She urged all to “respect the investigations and its contents be kept confidential”

Speaking on a panel discussion on CVM TV in which the importance of the role of the witness is concerned. The host  Mr. Chen asked Ms. Llewellyn to clarify her news release on Reid’s probe.  The DPP said inter alia “We do not have a complete file … what is there does not reach the threshold to mount a viable prosecution.  Asserts the noted female prosecutor who is celebrating 10 years at the DPP’S office. She is the first female DPP.

It is our view that the position arrived at by the DPP appears to be of sound judgment and should not be ignored.  Too many cases fall apart due to public pressure to rush to an arrest and charge of suspects.  Our perspective is guided by the words “Does not meet the threshold to mount a viable prosecution.” We are proud if not  very fortunate to have a DPP of such a high calibre.
We hope the DPP’S advice will be followed.