Film Review: In J.C. Chandor’s ‘A Most Violent Year,’ the capitalist is the gangster 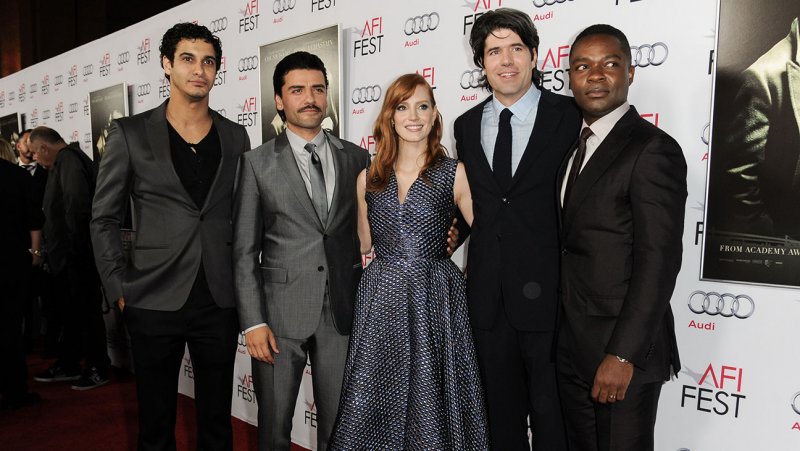 In his exciting first three films, writer-director J.C. Chandor, the son of a Merrill Lynch investment banker, has proven to be a canny, clear-eyed studier of capitalism, sensitive to its strivers and alert to its ethical storms.

His debut, “Margin Call,” plunged into the board rooms of a Wall Street firm in crisis. He followed that with “All Is Lost,” a metaphorical survival film about a man (Robert Redford) literally wrecked by the global economy.

In “A Most Violent Year,” Chandor widens his scope, fusing a solemn meditation on the American Dream with a ’70s-styled gangster flick. Oscar Isaac plays Abel Morales, the young head of a Brooklyn heating company. With a risky bit of lending, he’s trying to expand his business while at the same time fending off mysterious hijackings of his trucks. It’s 1981 New York, one of the city’s most crime-ridden years, and violence crackles in the streets.

The atmosphere is exceedingly rich. The greatest pleasures of “A Most Violent Year,” vividly shot by the excellent up-and-coming cinematographer Bradford Young (who also lenses “Selma”), are the earthy browns and yellows of its moody period details: Morales’ beige overcoat, the bare winter trees of its suburban Westchester, the electric wide shots of New York highways.

Where we are can’t be mistaken. This is Sidney Lumet territory: street-level New York, alive with corruption, danger and moral quandary. It’s a street corner of cinema Lumet so definitively staked out that, though Chandor is far from his direct descendent, Lumet’s spirit can’t help but loom over “A Most Violent Year,” set in the year his “Prince of the City” blazed across marquees.

The movie is doted by the standby scenes of gangster films: the clandestine gathering of rival family businesses, the shootout (handsomely done on the 59th Street Bridge), the sudden police raid of the boss’s home. The film’s excellent chase sequence leads irrevocably to the era’s great icon of decay: a graffiti-covered subway.

That “A Most Violent Year” builds all of this not on the usual glamorized misdeeds but on the residential oil business _ a line of work whose terrors usually only come monthly by mail _ is both slightly reaching and a clever adaptation of the crime thriller. This is about the dirty work of mainstream American business, not the underworld.

For Chandor, the backdrop of money, oil and guns make rife fodder for big American themes. Morales, elegant with a politician’s manner, is grounded by a belief in his cleanness. “We’re at war,” he’s told of the cutthroat industry, to which he responds: “Well I’m not.”

But his remove from the fray gets tested; idealism not be enough to survive. His wife Anne (a slinky Jessica Chastain) is the daughter of the former owner of Morales’ business, and she slowly reveals the measures she’s stealthily taken to prop up the company. Morales’ in-house lawyer (Albert Brooks, who’s amassing a tremendous late career as a character actor) is also pressuring him to take more drastically illegal steps even while the suspicious local district attorney (David Oyelowo) is investigating.

These pressures enflame the film’s slow-burn, never igniting with the fury the film’s title promises, but adding up to a lean, always absorbing examination of what success takes in a gritty marketplace ruled by raw power. “We are so weak now,” laments Morales at a moment of leverage.

The performance by Isaac (“Inside Llewyn Davis”) is commanding. His restrained businessman and aspiring immigrant clearly evokes Pacino’s Michael Corleone, and it’s a testament to Isaac that he can get even within a mile of that comparison.

If there’s something that holds back Chandor’s films, it’s their conceptual neatness and their hard-to-miss allusions. (A tragic side story involving a driver in Morales’ fleet is this film’s most glaring misstep.) But his control is impressive enough to make me want to him to _ like Morales _ get a little dirty.

“A Most Violent Year,” an A24 release, is rated PG-13 by the Motion Picture Association of America for “language and some violence.” Running time: 124 minutes. Three stars out of four.