In Jamaica’s capital, some schools and businesses close due to smoke from burning dump 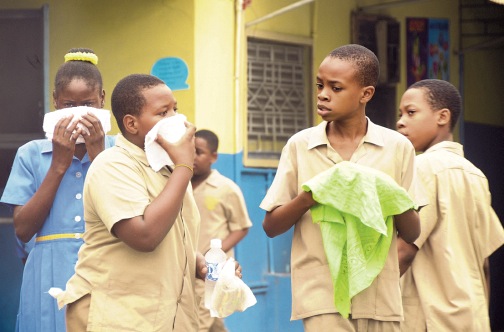 KINGSTON, Jamaica _ Noxious smoke continued to spiral Monday from a sprawling trash dump five days after a major blaze erupted, closing a number of schools and businesses in sections of the island’s capital and sending hundreds of people to clinics and hospitals.

Jamaica‘s education ministry called for some 50 schools to remain closed Monday due to the acrid smoke billowing out the Riverton City dump on the outskirts of Kingston. Schools that remained open shut their windows and doors to try and prevent the smoke from getting inside as plumes shifted direction on a breezy day.

The blaze started Wednesday, engulfing some three-quarters of the 120-acre dump that has seen repeated fires over the years. Health officials say the smoke from the dump fire has caused more than 840 people to seek medical treatment so far. There have been no deaths, according to Dr. Marion Bullock-Ducasse, director of disaster management in the health ministry.

Education Minister Ronald Thwaites said the Cabinet decided Monday it had to postpone the country’s high school entrance exams for one week “to ensure fairness to all candidates.” The high-stakes test for Jamaican youngsters had been scheduled for this week.

For days, authorities have said they had the dump fire contained, though smoke continued to blanket large swaths of the capital and neighbouring areas.

Jamaica Fire Commissioner Errol Mowatt told a Monday news conference that the “smoke cover is still very, very strong,” but that the fire has eased significantly since last week. He acknowledged that work fighting the massive dump fire “started slowly due to inadequacy of resources.”

The head of the government agency that manages the dump also complained about a lack of resources. Jennifer Edwards, head of the National Solid Waste Management Authority, rejected criticisms that poor management was behind the disruptive dump fires.