Julian Marley, son of Bob Marley, has recently shot a new music video for his single “So High” from the Reggae Vaccine Album. This comes on the heels of the success of the song hitting #2 on the USA and Canada Reggae iTunes singles charts and ahead of his USA Tour. 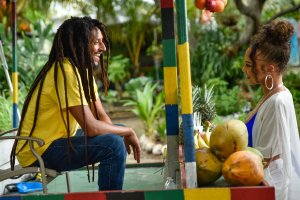 The video was shot on location in Miami, Florida, and stars Model and Actress, Savannah Garcia, who is of Trinidadian and Guyanese parentage. The video’s Director is Keith Walker.

The album, Reggae Vaccine, is a compilation album that was released on June 4th, 2021 by the Contractor Music Group, and Julian Marley’s single “So High”, was produced by Richard Roache.

The video will premier on the BET networks.