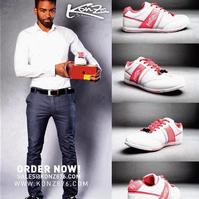 Jamaican dancehall superstar Konshens has made a major power move with the groundbreaking launch of his shoe line Konz 876.

With this game-changing move, Konshens will set new standards for the dancehall game.

Konshens told The Weekend Star that the plan is to build the first worldwide-recognised dancehall brand.

“I chose a shoe line because you can bring more culture into it. It takes a lot more effort as opposed to printing up T-shirts, plus there is a huge market for it,” he said.

The artiste has already received a record amount of pre-orders based on posts from his Instagram and Twitter accounts.

“Dancehall and Reggae music have the widest range of core fans worldwide and I think the only thing that separates us from other more mainstream genres is the lack of entrepreneurship on our part as artistes. There’s so much more we can do to maximise on our potential, influence and pull power,” the artiste said.

The Konz876 line is high-end shoes it is not out of reach for consumers. The brand’s first release will be five different shoes.

In addition to a store which will be opened at West Kings House Road, Kingston 13, on Monday, September 9, there will also be two launches for the line.

“The first will be in Kingston at The Quad on September 13 and the second launch will take place at the Donway Village on the Hip Strip in Montego Bay on September 14,” Konshens said.

The company has also developed a website – www.konz876.com to facilitate purchases outside of Jamaica. There are also plans for launch parties for the brand all over the world, based on the sheer magnitude of Konshens’ fan base and his rising popularity worldwide.

“I wore my shoes on a two-week worldwide tour recently, and Konz876 has been buzzing internationally. This move created a vast amount of interest in the brand, people wanting to know more about it, and they were clamouring to get their hands on a pair,” Konshens said.

“On our next batch of shoes, as well as more men’s designs we will place more emphasis on the ladies as we have just concluded our market research to see exactly what women want to wear, as their swag changes even more rapidly than ours as men,” he said.

Though other artistes have started merchandising lines before, but were unable to sustain it, Konshens told The Weekend Star that his will have longevity.

“This is a part-time thing to me. I will be doing both music and this. It’s not a here today, gone tomorrow thing. Plus, I have business partners that are already successful businessmen. We a go hard,” Konshens said.

For the original report go to http://jamaica-star.com/thestar/20130906/ent/ent1.html