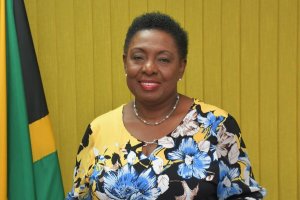 At a time when Minister Grange needs strong support and so appointed a team she give muscle to her team anthem:

As the George Wright issue develops steam like a steam driven locomotive climbing Mount Everest, there is trouble brewing in the Gender Ministry.

It was an apparent broken-hearted Gender Sports and Culture Minister, Honourable Olivia ‘Babsy’ Grange who was almost in tears as she publicly disclosed that the very Gender Advisory Council that she personally appointed who were plotting and issued a statement without consulting with her.  Virtually blind siding and stabbing Grange in the back.

Senator Lambert Brown is recommending vigilante or jungle justice. What a shame? We need a GAC now most urgently. More than ever before.

It was a coup of no mean order. The distress in Minister Grange’s voice was as clear as a well cleaned plate glass on a storefront displaying the skimpiest underwear.

The not so pleasant exposure of the underbelly of a plot of deception that was exposed by the conduct of the Gender Advisory Council, (GAC) chaired by Minister Grange herself was too heavy for the Minister to suppress any longer. She had to let it out. Pressure as is said locally “burst pipe.” The level of betrayal that unfolded would make Brutus’ s deadly attack by stabbing to death and assault on Julius Caesar as portrayed by William Shakespeare in his Tragedy named ‘Julius Caesar’ appear to be child’s play. With such blatant betrayal in your close inner circle especially from people whom you personally appointed to be your eyes and ears. The Minister could hold back no more. Such conduct is inexcusable.

We are shocked to learn of this betrayal. The Gender Minister Grange has no choice, but to act decisively. What is she waiting on to send a signal that betrayal will not be tolerated. They were put in a position of trust. Their conduct should be robust. No excuses at all.

Are these former PNP operatives who Minister Grange is believed to admire and embrace a lot.  Is this true Minister Grange?  Over to you, Madam. I am not suggesting discriminating against anyone, but zebras are not know to change their stripes.  Do they really?

We say Minister Grange appoint a new Council with a female and male co-chair. Put equal number of both genders on this Council.

Hopeton O’Connor-Dennie is a veteran journalist who is also poet and crusader for fair play and decency in public life. He has international exposure.