Juveniles in Correctional Facilities to Benefit from New Programme

Pilot Phase of Electronic Tagging Coming to an End 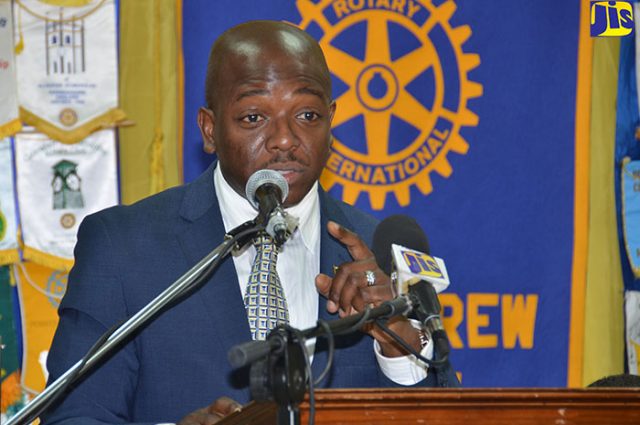 Photo: State Minister in the Ministry of National Security, Senator the Hon. Pearnel Charles Jr., emphasises a point while addressing a meeting of the Rotary Club of St. Andrew North, at the Institute of Chartered Accountants building, Ruthven Road, on June 19

State Minister in the Ministry of National Security, Senator the Hon. Pearnel Charles Jr., says the pilot phase of the electronic tagging/monitoring programme for low-risk inmates is coming to an end.

Addressing a meeting of the Rotary Club of St. Andrew North at the Institute of Chartered Accountants building, Ruthven Road, on June 19, the State Minister said the Ministry is now moving to where persons who meet the criteria will have the electronic monitoring unit placed on their hands or ankles, and, wherever they go, they can be geo-fenced.

According to a release from the Security Ministry in February, some 30 inmates were selected to serve the remainder of their sentences outside of prisons, while being monitored by an electronic system.

The inmates were selected after the Department of Correctional Services conducted a series of interviews.

Senator Charles said the electronic tagging/monitoring programme will assist in reducing the cost of keeping an inmate in an enclosed location.

“It will reduce the cost to you and to me, while at the same time allow this person to keep that connection with their family and community. So, it is going to have a multiplicity of positive impacts,” he noted.

“You will have less detachment of the family, but you will also have more rehabilitation, because that person will also have to be involved in a probation process. They are not going to be left out there,” Senator Charles Jr. added.

The electronic tagging/monitoring system is part of the ongoing rehabilitation reform of the Department of Correctional Services and the drive to modernise the island’s security infrastructure, aimed at achieving sustainable reduction in the level of crime in Jamaica.