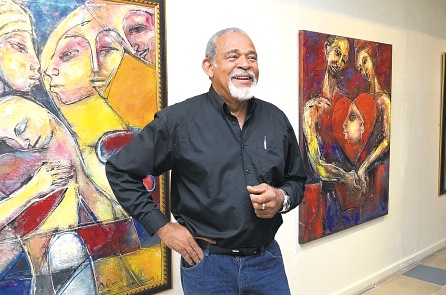 Prime Minister Andrew Holness has expressed profound sadness at the passing of Cecil Harvey Cooper, CD. The Prime Minister said Jamaica has lost a true icon, who had a distinguished career as an influential musician, artist and art educator. “His extraordinary career in the local art world will never be forgotten. He was an energetic and passionate educator who influenced many outstanding graduates,” he added.
Cecil started his art studies in 1962 at the Jamaica School of Art (now Edna Manley College) and later on attended the Arts Students League in New York. He returned to New York from 1991 to 1993 where he obtained a Masters of Fine Arts degree.
Among his most outstanding achievements is heading the Painting Department at the Jamaica School of Art for 28 years. He was also recognized as a gifted singer, with a powerful and distinctive tenor.
Cecil was conferred with Jamaica’s fifth highest honour, the Order of Distinction (Commander Class), at a special investiture ceremony at King’s House on September 6.
Prime Minister Holness said “Cecil had an incredible artistic passion which was revealed in his numerous paintings. His commitment to the development of art is an inspiration for all of us and we will deeply miss this exceptional Jamaican. I extend heartfelt condolences to his family and friends, especially to his wife, Rose Bennet Cooper. ”

The loss of an icon is never a pleasant moment … we wish his family well as they morn the loss of a Jamaican treasure.

His family can be comforted with the fact that their husband, father, and their family member made a significantly contribution to Jamaica’s rich cultural status.

The government gave Cooper a national award. Late, but better late than never.