Road Leading to Bustamante Birth Home to be Rehabilitated 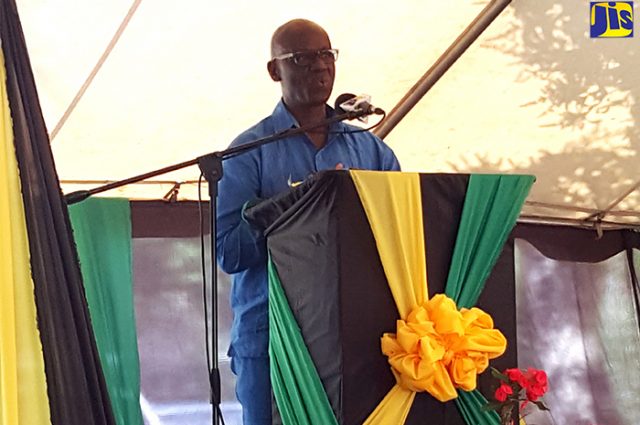 Minister of Local Government and Community Development, Hon. Desmond McKenzie, says $20 million will be provided to rehabilitate the road leading to the birthplace of National Hero, The Right Excellent Sir Alexander Bustamante in Blenheim, Hanover.

Mr. McKenzie, who was speaking at the 133rd birthday anniversary celebrations of Jamaica’s first Prime Minister in the community on February 24, said plans are far advanced to begin the roadworks.

“I am giving a commitment to the community that when we celebrate Labour Day 2017, this road will reflect what Sir Alexander Bustamante deserves,” he said.

Mr. McKenzie also informed that restoration work will be done on the community centre, which has fallen into disrepair.

“I have instructed the Hanover Municipal Corporation, along with the technical officers of the Ministry of Local Government, to immediately start an estimate of this facility, and we are going to provide the money to renovate it,” he said, noting that the community will be engaged in the process.

Mr. McKenzie said it is important to show respect for the nation’s stalwarts, who have paved the way for a modern and fruitful Jamaica.

“Mr. Bustamante was the forerunner of our freedom to becoming an independent nation. What he has done for us as a nation could never be repaid. We deserve to do so much more for this outstanding Jamaican,” he said.

Mr. McKenzie noted further that “so much history resides in Blenheim, and the community should always do its best to put it on display, proudly remembering the man who is still recognised internationally as a patriot and a visionary and one of Jamaica’s favourite sons”.

Born Alexander Clarke in 1884, Sir Alexander, who would later change his surname to Bustamante, served as the nation’s first Prime Minister after Jamaica gained its status as an independent nation from Britain in 1962.

In 1965, after suffering a stroke, he withdrew from active participation in public life, with Sir Donald Sangster succeeding him as Prime Minister in 1967.

Sir Alexander was proclaimed a National Hero in 1969. He died in 1977 and was buried at National Heroes Park in Kingston.