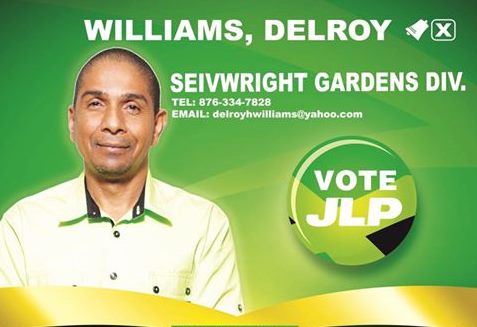 Executive Director of the Jamaica Labour Party (JLP) Senator Delroy Williams is expressing his heartfelt gratitude to the electorate for their confidence in the JLP.

Williams, who won his Seivwright Gardens division convincingly on Monday, says that he had no doubt that the people of Jamaica were better informed based on the campaign the JLP ran and the accessibility of the candidates. It is then no surprise that they wisely elected responsible stewards of the parish councils.

While admitting that the low voter turn-out was a concern, Williams says that if has been a trend for the last two local government elections and that public education and interaction will significantly help. He notes low turnout is not only a Jamaican phenomena but regional.

In 2007 there was a 38% voter turnout and a 35% voter turnout in 2012; with a 30% voter turnout this year the JLP is determined to manage the parish councils and educate the public on its functions in a way that will foster greater involvement from the wider populous.

Williams say he is motivated by the involvement of youth in this election and affirms that this played a big role in the victory of the JLP. He notes that several of our first time Councillors are from the Generation 2000 arm of the party who won convincingly in their divisions.

Williams is one of 21 JLP Councillors who won their division in the Kingston and St Andrew Corporation.

Well said Senator Delroy Williams … we endorse your observations and perspectives why the voters went for more greenery. They were concerned about the amount of decay and orange brownish scenery. They preferred greener pastures.

Jamaicans are quite astute and are ambitious … always striving for better.