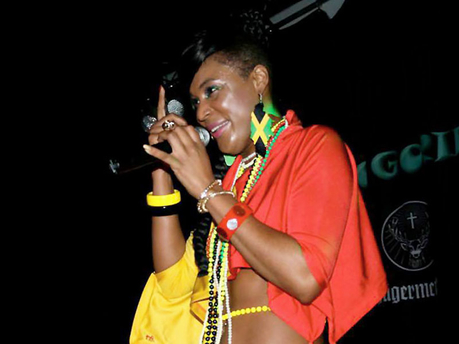 Jahseen ‘Tenza’ Foster, originally from Kempshot, Montego Bay, has been making a name for herself in Europe.

“I see myself as a role model for all young females who want to make it in life, whether in the music industry or any other field. Stand strong and work towards your dreams and goals,” Tenza said.

From a large family of 15 children (Tenza has nine brothers and five sisters), there was always company, but the sheer numbers also created disappointment and struggles.

Foster migrated to Slough, United Kingdom, when she was 14 years old. Although she left her family behind, Tenza made new friends through her involvement in the Slough Youth Centre’s music classes.

It did not hurt that she always had a passion for music, especially admiring Bob Marley, Yellowman, Beres Hammond, Bounty Killer, Dennis Brown, Lady Saw, Super Cat, and Beenie Man.

She kept the family link by going by the name Tenza, given to her by family because she was the 10th child.

Tenza became a member of the formerly Def Jam-signed female dancehall group, FYA, which did the popular singles Too Hot and Must Be Love. Leaving FYA in 2009, Tenza started her own label, TMD Records, on which she has done Ready Back, Wicked Like Me and Pon Dem Endz Again. These are in addition to EPs and promotional mixtapes.

Tenza has performed in India, Japan, Malaysia, Sweden, Austria, Gambia, and Uganda, among other countries.

She has not restricted herself to the stage, having got involved in the Ryder Midnight all-female 10k walk; is a proud sponsor of Buckingham All-Age School in her native Jamaica; hosts the Tenza Fan Club in Brikarma, Gambia; and is also goodwill ambassador for the Brikarma Health Centre.

For the original repot go to http://jamaica-gleaner.com/gleaner/20131001/ent/ent3.html