Town and Villages to Come Alive for Jamaica 55 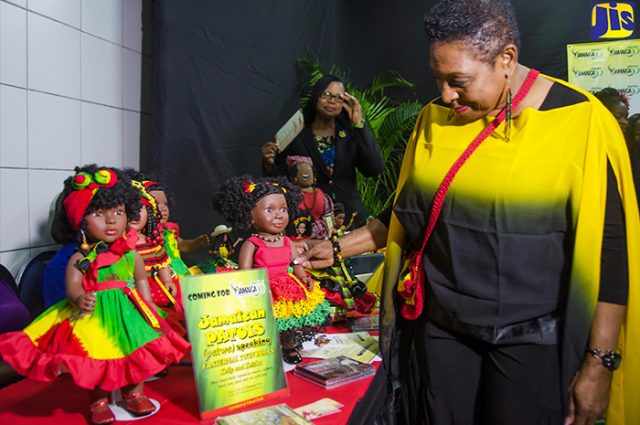 Photo: Minister of Culture, Gender, Entertainment and Sport, Hon. Olivia Grange, examines Jamaican patois-speaking dolls on display during the launch of the Jamaica Independence Festival at the Courtleigh Auditorium in New Kingston on June 14.

Town centres and villages across the island are expected to come alive with the celebration of culture for ‘Jamaica 55’.

Activities include church services; parish vigils; flag-raising ceremonies; festival bandwagon, which is a mobile showcase of the best talents from the parishes in the performing arts, public fora, street dances, independence concerts and stage shows.

Minister of Culture, Gender, Entertainment and Sport, Hon. Olivia Grange, said the festivities will include new features such as a Jamaica 55 commemorative album, the Western Jamaica Festival Village in Montego Bay, and Kingston Reggae Night.

She informed that the special commemorative album will replace the traditional Festival Song competition.

“The commemorative album will carry 15 tracks, including iconic winning festival songs, as well as popular songs that never won and new songs. These will include an entry by Bob Marley, Rita Marley; and ‘Stepping Razor,’” she informed.

Ms. Grange was speaking at the launch of the Jamaica Independence Festival from July 29 to August 7, at the Courtleigh Auditorium in New Kingston on June 14.

She informed that the Western Jamaica Festival Village in Montego Bay will ensure that Jamaicans and visitors on that side of the island can experience the rich Jamaican culture in many forms.

Meanwhile, Kingston Reggae Night will be a feature of the Independence Village, which will open at Independence Park on July 29.

“Kingston Reggae Night is a celebration of reggae music and reggae icons. Kingston Reggae Night will also commemorate the designation of our capital as a United Nations Educational Scientific and Cultural Organization (UNESCO) Creative Centre of Music and the 145th anniversary of the city of Kingston as the capital of Jamaica,” Ms. Grange said.

She said the Independence Village will be a centre of festivity.

The Gospel Song Finals will be held in Montego Bay on August 1, while the festivities will conclude with the Independence Grand Market and fireworks in downtown Kingston on August 7.

Wife of the Prime Minister, the Most Hon. Juliet Holness is the new patron of the Miss Jamaica Festival Queen Competition.

Ms. Grange is encouraging Jamaicans to embrace their culture and participate in the various activities.

“I want to see town centres, communities, public parks, public- and private-sector offices and facilities decorated in our national colours as we celebrate Independence,” she said.

She noted that partnerships have been forged with countries, including the United States of America, to provide images of the country’s icons; and China to assist with the fireworks display.

The theme for ‘Jamaica 55’ is ‘Celebrating Jamaicans at Home and Abroad’.

Independence will also be celebrated through fashion, under the theme ‘Wear di Vibes… It’s Jamaica 55’. Persons are encouraged to “wear something black and embellish it with a touch of green, gold and red” throughout the season.