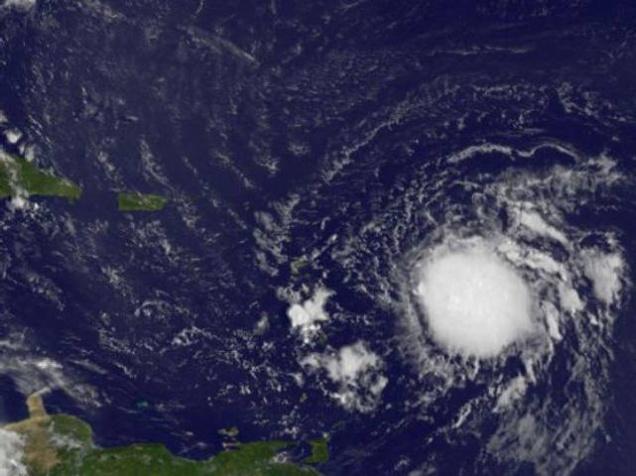 SAN JUAN, Puerto Rico _ A fast-moving Tropical Storm Erika neared Antigua and Barbuda early Thursday, dumping rain on the eastern Caribbean on a path expected to take it by Puerto Rico later in the day. Across the region, officials ordered schools, airports and even casinos to close and they prepared shelters ahead of the storm, which was no expected to strengthen over the next two days. Late Wednesday night, Erika was located about 110 miles (175 kilometres) east-southeast of Antigua and was moving west at 16 mph (26 kph) with maximum sustained of 45 mph (75 kph), according to the National Hurricane Center in Miami. Authorities in Antigua and Barbuda warned of flash floods given the extremely dry conditions caused by the worst drought to hit the Caribbean in recent years. Boats at Shell Beach Marina on Antigua’s north coast have been out of the water since Saturday, with people not taking chances as Erika approaches, said Caroline Davy, a marina employee. She said many people were caught off-guard when Tropical Storm Gonzalo battered Antigua last October. “Too many times we’ve seen things happen that were not predicted,” she said. Authorities in the nearby Dutch Caribbean territory of St. Maarten said schools and government offices would close Thursday. They also asked that casinos, restaurants and other businesses close by midnight Wednesday. Officials warned they might temporarily suspend power and water service as the storm approaches. The hurricane centre said Erika would move near Puerto Rico and the Virgin Islands on Thursday. All airports in the U.S. Virgin Islands would be closed to incoming flights until Friday, and government offices would close as well, said Gov. Kenneth Mapp. “This is a fast-moving storm, and so we expect conditions to deteriorate rapidly,” he said. Tropical storm warnings were issued for Puerto Rico, the U.S. and British Virgin Islands and the Leeward Islands. A tropical storm watch was in effect for the northern Dominican Republic, the Turks & Caicos Islands and southeastern Bahamas. The storm is expected to be near South Florida by Monday, according to James Franklin, chief hurricane forecaster at the Miami-based centre. But its intensity is still uncertain. “We don’t know how much of the storm will be left,” he said, adding that it faces strong upper-level westerly winds in the next two to three days. Meanwhile in the Pacific, Ignacio strengthened into a hurricane. The storm’s maximum sustained winds increased to 75 mph (120 kph). Hurricane Ignacio was centred about 1,275 miles (2,055 kilometres) east-southeast of Hilo, Hawaii, and was moving west-northwest near 13 mph (20 kph). ___ Associated Press reporter Judy Fitzpatrick in Philipsburg, St. Maarten contributed to this report.