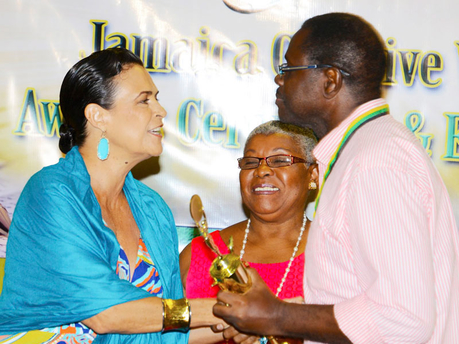 Basil Dawkins’ new script My God Don’t Wear Pajamas copped the silver medal and a trophy for best overall playwright at this year’s JCDC Creative Writing Competition, bringing him full circle since his very first script Flat Mate, penned in 1978, won him a bronze medal in what was then titled the Jamaica Festival Literary Competition.

This prestigious new medal brings Dawkins’ JCDC Creative Writing medal standings to one bronze, three silvers and one gold. The gold medal was received for Hot Spot in 2005, placing him in the very elite company of only two other playwrights – the late dramatists Dennis Scott and Stafford Ashani.

Undoubtedly one of Jamaica’s most prolific playwrights and theatre producers, Dawkins has written a total of 24 plays in the past two decades, of which all but one have been produced.

His latest medal winning entry, My God Don’t Wear Pajamas, will be moving from the page to the stage on December 27, under the sure hand of Actor Boy Award winning director, Douglas Prout and will feature some of Jamaica’s finest seasoned performers including: Donald ‘Iceman’ Anderson, Zandriann Maye, Jean-Paul Menou, Bertina Macaulay and introduces School of Drama graduate Paul Wilson.

My God Don’t Wear Pajamas is the story of a struggling young Jamaican man (Donald Anderson) who is undergoing a publicly humiliating separation from his wife (Zandriann Maye), when his America-based father who he is aware of, but has never met, dies. A very substantial estate is left to be divided evenly between himself and his father’s widow, (Bertina Macaulay), but the widow’s only child (Jon Paul Menou), will stop at nothing to do his stepbrother and even his mother, out of their inheritance.

Dawkins’ ability to use comedy and drama in equal parts to tell compelling stories continues to win over local and overseas audiences Dawkins explained.

“I don’t know that I have themes that I consciously set out to write about. I like to observe what topics, themes and concerns keep peculating in my mind and question whether they would find significance in the wider society. If it continues to resonate in my head with more layers, then I start thinking about it seriously to see if there may be a story with a beginning, middle and end.”

Dawkins, in his ever present desire to challenge himself, would like to one day turn his attention to writing and producing for the silver screen. He credits movies as his major influence for writing for the stage.

In fact, Dawkins states, “When writing my mind thinks in terms of movies, both in approach, structure and form and then I modify to fit that movie on a small stage with none of the technological and technical assistance that a movie maker has at his disposal. I hope the Jamaican audience will enjoy My God Don’t Wear Pajamas, my latest ‘movie for the stage’.”

For the original report go to http://jamaica-gleaner.com/gleaner/20131202/ent/ent1.html