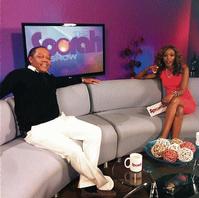 The summer was one of musical bliss for Sean ‘Contractor’ Edwards, who had experienced an ample amount of successes throughout Europe promoting his and the artistes of Downsound Records (DSR) music.

The multitalented Contractor, who resides in St Ann, has also been featured on some of Europe’s biggest television and radio shows such as London’s Choice, France’s number one urban reggae station Generation FM and theSporah Show, which is Africa’s number-one television show, based in London.

Also, via his advertising agency, Contractor Music Marketing, the Babylon Be Still writer also sponsored the August 17-18 Marcus Garvey Tribute Festival, which took place at the Rio Nuevo Village in St Mary. Contractor was also invited to visit historical sites such as the Eiffel Tower and The Obelisk.

Back in the island, Contractor is ready to take his part in helping to promote Sting 30th anniversary. The popular event is being organised by promoter Isaiah Laing and businessman Joseph Bogdonavich, via his music label, Downsound Records.

For the original report go to http://jamaica-star.com/thestar/20131022/ent/ent8.html