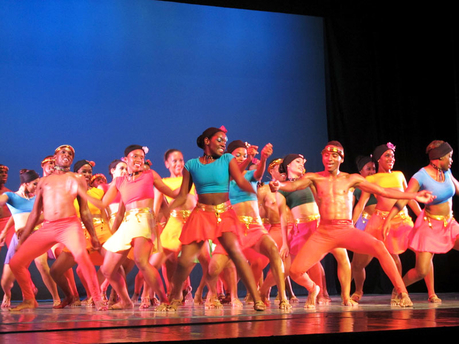 A musical series, begun 25 years ago at the Bank of Jamaica (BOJ) and which has brought pleasure to thousands of Jamaicans, continues today. There’ll be another high-quality, free concert in the bank’s auditorium at lunchtime.

Starting at 12:30 p.m. the National Dance Theatre Company (NDTC) Drummers, led by Ewan Simpson, will be entertaining dozens – and probably hundreds – of patrons. A quick phone call to attorney-at-law Simpson, the recently named leader of the NDTC Singers, gave me a heads-up on today’s programme.

It will comprise the drummers’ interpretation of a variety of Jamaican rhythms, Simpson said. The hourlong session will provide music ranging from kumina through mento to reggae. Among those moving to the beat will almost certainly be a group of retired ladies who call themselves ‘the recycled teenagers’.

“They always come early and sit in the front and they’re here no matter what,” Lurane Allen, director of the BOJ’s board secretariat, told me in a recent interview.

The concerts, held on the last Friday of every month, were started about a quarter-century ago by then BOJ Governor, Hon G. Arthur Brown, the first Jamaican to hold the post. Allen said the shows have always been popular, although there was a break in the series between 1997 and 2007.

I saw the audience’s enthusiasm for myself at the last two shows. At the July show featuring Lloyd Lovindeer and the Fab 5 Band, there was standing room only in the bank’s huge auditorium, and the venue was three-quarters full for the dance concert by the Company Dance Theatre on August 30. After that second concert, I was escorted through several guarded glass doors and along carpeted corridors lined with expensive Jamaican paintings to speak with Allen.

Like the concerts, she said, the acquisition of the paintings was Governor Brown’s initiative. Both resulted from Brown’s belief that the central bank should reach out to and support the Jamaican community. Specifically, theconcert series was an opportunity to bring people to downtown Kingston, as part of the revitalisation of the capital city, Allen saying the thinking was “it would help keep Kingston alive”.

Part of the programme’s success lies in its variety, she continued. “We try to showcase all aspects of the performing arts (music, dance, drama). We also give an opportunity to people who wouldn’t otherwise be able to see free some of the best talent around. Many other patrons beside the ‘recycled teenagers’ attend religiously every month, she assured me, and “it had always been a tremendous success”.

Elaborating on the fare provided, Allen said the concerts provide music “in all its forms”. And fans will agree that there has been classical, reggae and mento music, to name a few of the offerings. And there have been a number of dramatic works, including, earlier this year, Trevor Rhone’s comedy-dramaTwo Can Play.

Allen, who is assisted in producing the concerts by Sandra Moodie, curator of the Money Museum, and Elan Neil, the museum’s assistant curator and emcee for the shows, admitted that her team contends with a flood of requests from performers wanting to get on to the BOJ stage. They come from all over the island, she said. “Of course, we can’t cater to everybody at once and have a waiting list for performers,” Allen said.

I asked if the many requests are because of the money the bank pays or simply the desire to perform. Allen saw it as a combination of the two.

“Of course,” she said, “there’s the prestige that goes with performing at the BOJ; they see the type of people we showcase. And for some, there isn’t much opportunity otherwise, given the economic situation of the country. There are a lot of groups in Jamaica, some trying to ‘buss’ as they say, and they’re looking for a platform on which to do that.”

As the producers are not always exposed to the would-be performers, especially those from outside the Corporate Area, many applicants have to be screened. One way of doing this is by asking for video clips. Pointing out that the concerts have to be ‘clean’, Allen said “our lunch-hour show is a family event and we implore our talent to keep things clean, as we always have children in the audience”.

Happily, performers have been willing to tailor their acts to the occasion and Allen couldn’t recall any embarrassments in that regard. “People have been respectful,” she said.

Aside from providing good entertainment, Allen said, the BOJ wanted to unearth good talent islandwide and, additionally, provide a balance of new groups with well-known ones. “The team would like to feature more groups from outside the Corporate Area, but sometimes we’re not aware of who is out there,” Allen said, adding that some performing arts careers have been launched at the bank’s concerts.

In addition to the 12 end-of-month shows for the year, Allen said, her team produces a 13th one in mid-December. It is an annual Christmas show with the University Singers, a concert that started during the 10-year break from the monthly ones. The Christmas concerts are in part for the benefit of the many Jamaicans who are returning home for the season and who would have wanted to see the BOJ auditorium shows, Allen said.

Looking to the future, she expressed confidence that since the concerts bring a lot of goodwill to the central bank (as Governor Brown had hoped they would), they might well continue for another 25 years.

For the original report go to http://jamaica-gleaner.com/gleaner/20130927/ent/ent2.html