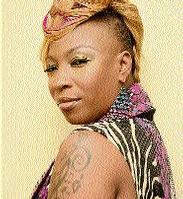 The ‘Money Goddess’, Macka Diamond, is all smiles these days as her ‘Dye Dye’single has become an international hit and a sex anthem in the Caribbean, especially the island of Trinidad and Tobago.

Since the single peaked at pole position on several reggae and dancehall charts, internationally, Macka Diamondhas performed in the twin-island Republic on nurmerous occasions and will return in December.

“They really love Macka Diamond in Trinidad that has always been the case. whenever I have a hot song in dancehall, it always translates into several shows in Trinidad. I love the fans over there and they give me mad love whenever I go over there. every show sell off,” she said.

Next weekend, she will kick off her French Caribbean tour in Martinique (a show being staged by local radio station TRACE FM), then she is off to Bronx, Washington and Queens, followed by Saint Maarten, Guadeloupe and French Guiana.

“And right after that we head out to Europe for the European tour, which includes stops in Paris, Poland, Germany and Switzerland, and then we have a series of shows in the United Kingdom, then we head back to Caribbean and South America, and do Tortola, Suriname and, I think, Costa Rica. So, trust mi, di schedule mad, but I am loving every minute of it,” Macka Diamond said.

Local fans can, however, catch Macka Diamond in action next at Full Black, set to be staged at the New Mas camp on October 20, and at her own cook-out, on the same date, at Boasy Tuesdays HQ.

Last week, Macka Diamond releasedthe Spanish version of Dye Dye on IRIE FM with DJ Sunshine doing the honours.A number of other disc jockeys and selectors have also been supporting the single. Macka Diamondhopes to tap into Latin and South American markets where the song has already begun to take off.

“Since its release,a lot of selectors and radio personalities have been linking me for the song, both locally and overseas, but Adrian Locke, the producer, is going to make the song available on iTunes, first, before we do a wider release, mi mek sure tell Claude Mills that him mustn’t leak it,” she said.

Macka Diamondlaunched the video for the single, Body Calling,for So Unique Records, via the Internet, andthere is a huge buzz surrounding the racy video and single.

“Dexter 3D was the one who shot the video and he did my make-up and everything and gave me an incredible new look, so the video isvery impressive, the first night it came out, it had over 1,000 views in three hours,” she said.

For the original report go to http://jamaica-star.com/thestar/20131011/ent/ent6.html