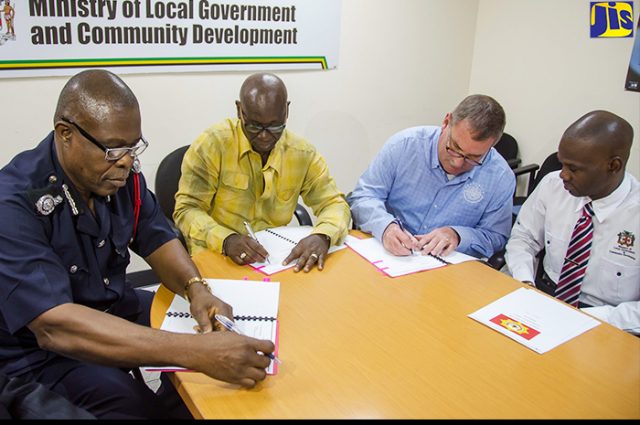 The Jamaica Fire Brigade (JFB) is to acquire two new fire boats valued at US$1.3 million.

A contract for the acquisition of the vessels was signed by the Ministry of Local Government and Community Development, the Jamaica Fire Brigade and United States boat manufacturer, Brunswick Commercial and Government Products (BCGP) on February 14 at the Ministry in Kingston.

In his address at the ceremony, Local Government and Community Development Minister, Hon. Desmond McKenzie, said the vessels will significantly improve the capacity of the Fire Brigade to respond to emergencies.

“This represents a major investment in the Jamaica Fire Brigade and is part of the Government’s continuous effort to improve the social services of the Brigade. This signing will put us in good stead to respond if and when there is a fire or any emergency situation,” he said.

He added that discussions are underway on measures to strengthen the services of the Brigade, including the construction of three new buildings to replace dilapidated stations in St. Mary, St. Thomas and St. James as well as the acquisition of four fire trucks later this year.

Public Relations Officer for the Jamaica Fire Brigade, Senior Deputy Superintendent, Emilio Ebanks, told JIS News that the vessels, which are expected to arrive on the island by March 31, are to be assigned to the Kingston and St. James stations to serve the eastern and western parts of the island.

“We are trying to provide coverage in terms of the ports that have the most traffic. We are looking along that area, and if needed the boat from St. James can easily come around to Falmouth or even Ocho Rios and St. Ann’s Bay as well. Plus, we have a boat now that is operating in Ocho Rios, so that will give us coverage in terms of eastern, western and central areas of the island,” he informed.

The fire boats have multi-modal functions with capabilities to conduct water rescue as well as water ambulance service.

“In the event that we need to take someone from a vessel and bring them on board under medical conditions with trained persons on board, they also have equipment to (facilitate) that,” Mr. Ebanks pointed out.

The boats have the capacity to carry six persons on board and are outfitted with a cabin which houses four persons and has bathroom and kitchen amenities.

As part of the conditions of the contract, several Fire Brigade officials will be trained in the operation, navigation, servicing and maintenance of the units.

Acting Commissioner of the Jamaica Fire Brigade, Raymond Spencer, expressed his thanks for the units.

“The signing of this contract brings a deep sense of relief to the men and women of the fire service, particularly because of the high risks at our ports. We want to make sure that in the event an incident occurs because of increased activity at the ports, we will be in a position to respond effectively,” he said.