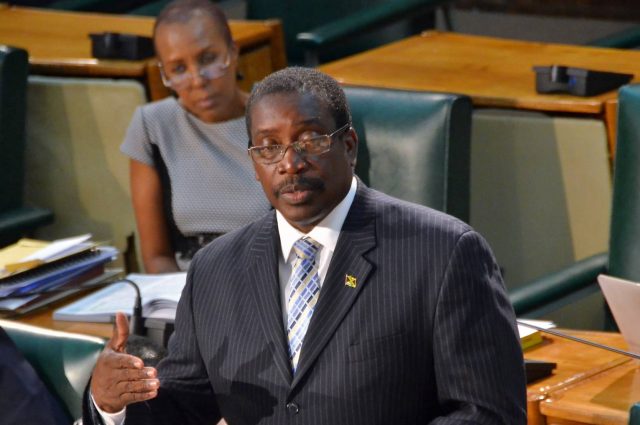 Photo: Minister of National Security, Hon. Robert Montague, addresses the House of Representatives on Tuesday, June 13. In the background is Minister of State in the Ministry of Finance and the Public Service, Hon. Fayval Williams.

Speaking at the annual party conference of the Jamaica Labour Party (JLP) the Nation Security Minister said there is legislation coming to deny those charged for gun crimes or charged for murder will not be granted bail.  Figures show that persons on bail accumulatively … have committed a reported 145 crimes while out on bail. These starling figures have been bothering the Security Minister for some time now.

Minister Montague has repeated these figures ever so often. Apart from murders, all other crimes have shown significant declines. Rape down, break ins down etc.  Attacks on tourist have always been insignificant.  We love our visitors and do not harm them. It is all about gangs fighting each other for turf and lotto scamming.

There has been a 53 percent drop in crime in Montego Bay since the Enhanced Security Measures (ESM) there. When compared with  the corresponding period in 2017.

A People’s National Party (PNP) Councilor Mr. Michael Troupe, Flanker Division, who was acquitted for Lotto Scamming some time ago … was suspended for 3 months recently from the Montego Bay Municipal Council (MBMC) on a “no confidence motion for bringing the Council into disrepute”  He has repeatedly been having brushes with the law.  This motion is believed to be in relation to the importation and or seizure of a shipment of 119 guns and ammunition destined for Jamaica, which was exposed by US agents in Florida recently.  Troupe has denied any involvement in the gun find.

The significant drop in crime is good news, and we should tell the world.

The granting of bail is a Constitutional Right.  Each suspect is considered innocent until proven otherwise, under our system of jurisprudence.

We hope Mr. Michael Troupe will check himself before he wrecks himself. Enough said!