The crisis gripping the underseiged Commissioner of Police has deepened.  This is so as the influential and colourful retired top Traffic cop Radcliffe Lewis declared that Commissioner George Quallo is “wounded”. 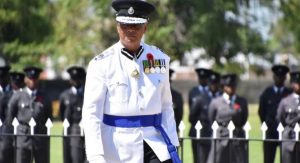 Quallo has another fire to out …it is his rocky relationship with minister Montague his political boss.  Despite public or other utterances and appearances, there seem to be no love lost between both men. The Police Officers Association (POA) has not helped in any way to improve the relationship between Quallo and Montague. When you detect smoke and a fire starts … if a garden hose can out the flames you should not resort to calling the fire brigade. The brigade most certainly do the job but the water damage could make things worst when the smoke is cleared.

It is my perspective that Quallo no longer enjoys the confidence of Montague. Professor Anthony Harriott, criminologist has referred to the Jamaica Constabulary Force (JCF). as toxic.  The goodly professor has called for the setting up of the Major Organized Crime Agency (MOCA) to be set up urgently. It must be a stand alone body like the FBI in the USA …asserts the internationally acclaimed criminology.”I cannot happen too soon” Harriot asserts.

The noted Criminology further is reported as saying that the JCF is toxic.  This is a serious commentary.

If your boss no longer enjoys your trust and therefore the classic “no confidence” in you … that you likely have to “tak whe you self”. The words in quotation marks is Patois or broken English used by many in Jamaica. Majority, if not all of Jamaican citizens who are born in Jamaica are bilingual. Patois when translated to standard English means “you must leave”.

Select Commish from outside the Police Force.

Former Assistant Commissioner Of Police Keith “Trinity” Gardener and Radcliffe Lewis were speaking on the radio recently in an interview looking at Commissioner Quallo’s suitability.  They both agreed that an outside person be selected to replace the Police Commissioner George Quallo.

Is Quallo wounded?  As usual the verdict is yours.  What is your perspective? This is ours.