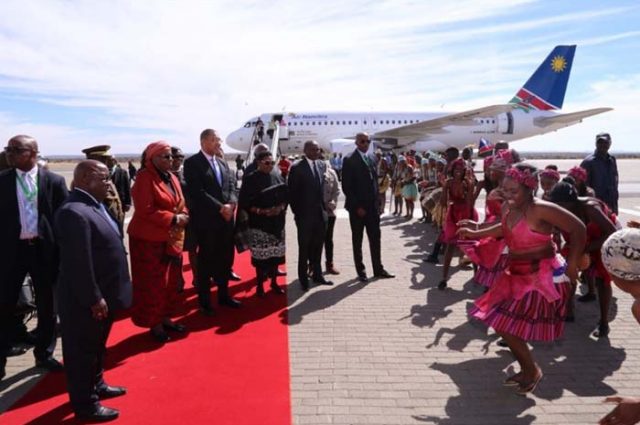 Prime Minister Andrew Holness has arrived in Namibia for what is the first official State visit by a Jamaican Head of Government to that country.

The Prime Minister engaged in a brief courtesy call with Deputy Prime Minister, The Hon Netumbo Nandi-Ndtaitwah. He was then transported in convoy to the Namibian State House where he had a short meeting with the President of the Republic of Namibia, H.E. Dr Hage G Geingob.

Both leaders expressed sincere appreciation for the strong ties between Jamaica and Namibia and spoke of the history of cooperation between the two countries in relation to Namibia’s independence struggle.

Prime Minister Holness will tomorrow commence the main program of his State visit, where he will hold official talks with the Namibian President, during which an MOU on cooperation in the field of Sports and one for political consultations will be signed.

Also tomorrow, Prime Minister Holness will meet with members of the Namibian Private sector at a luncheon to be hosted by the Namibian Chamber of Commerce and Industry.

Prime Minister Holness will then join the President of Namibia for the renaming of a street in the Capital City of Windhoek, in Honour of Jamaica’s First National Hero Marcus Mosiah Garvey.