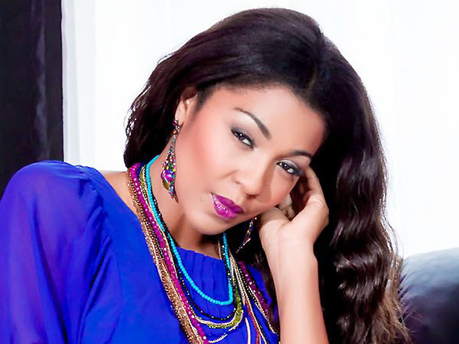 D’Angel opens up while Ninja Man looks on during Sting 30 at Jamworld in Portmore on Boxing Day, December 26, 2013. – Anthony Minott

Controversial dancehall artiste D’Angel was not booked for Sting 30 but ended up stealing the spotlight by pulling two separate stunts on the night.

The singjay, who recently caught the attention of internationally renowned gossip website mediatakout.comcourtesy of her skin- revealing wardrobe malfunction which took place at a recent performance, again revealed herself in a sexual manner to dancehall fans and the inquisitive local media, however, this time it was no accident.

While pulling her first stunt, which was to try and clash Ninja Man for the US$30,000 up for grabs, D’Angel decided to flaunt her goodies by spreading her long, neatly shaved legs in full view of the camera as the controversy- seeking patrons screamed, whether in shock or displeasure.

Media personnel quickly took the opportunity to snap pictures of the dancehall spectacle, while some patrons quickly flipped their smartphones to camera mode as D’Angel gyrated on the floor, the angle of her legs resembling the hands of a clock striking 7 p.m.

As soon as Sting concluded at 6 a.m. on Friday morning, some radio shows were already discussing D’Angel’s ‘spreading legs’ as much as they were discussing Super Cat’s performance and the entertaining clashes, many, however, expressing their disgust at D’Angel’s display.

One radio show even went as far as to compare D’Angel’s actions to the twerking controversy that took place at the 2013 MTV Awards involving Miley Cyrus and Robin Thicke.

The STAR caught up with D’Angel immediately after she pulled her Sting 30 stunts. She told The STAR that when she performed she went all out. She also revealed that she was shocked when she found out that her wardrobe malfunction hod gone viral, but admitted that sex sold.

“When I am performing, I just go all out – gyal clean, gyal good. mi just performing. anything goes. When I saw the pictures, I was shocked, but I mean usually I just turn my negatives into positives. sex sells. I don’t follow up the media and what the media has to say, but usually, I just turn my negatives into positives. I don’t see anything negative about a fat …. . at the end of the day, I’m just working with it. A just music mi a duh as usual and people can look out for the song about the pictures,” D’Angel said.

The artiste also said she walked on stage to clash Ninja Man because he called her name and she took that as an invitation because she wanted to win the US$30,000. D’Angel further disclosed that 2014 would see her pushing the envelope further as it relates to sexuality in the dancehall.

For the original report go to http://jamaica-star.com/thestar/20131231/ent/ent1.html