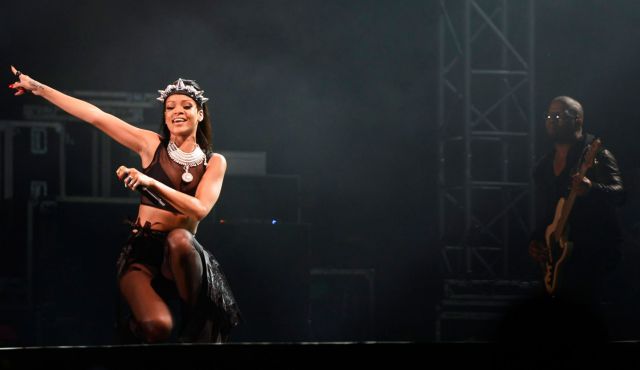 It was girls’ night out at Hayarkon Park in Tel Aviv for Rihanna’s one-night-only show in Israel as part of her “Diamond World Tour.” Teenage girls linked arms, mothers accompanied 10-year-old daughters, 20-something young women took selfies, and small percentage of men – reluctant boyfriends, benevolent fathers and gay couples – all waited on the grass for RiRi to alight upon the stage.

“She has an amazing voice, it’s so energizing and enlivening,” said Meital Kassabi, 28, who came with an old friend from the army because her fiancé would not go with her. “He doesn’t like Rihanna enough to come. But I love everything about her – she has soul.” Kassabi, who is studying to be a lawyer, said she doesn’t care about Rihanna’s personal life. “As long as she’s not hurting anyone else,” she said (never mind who hurts the star).

Ronit Fadlon actually came because of what Rihanna represents. She even brought her 12-year-old daughter Shani to the concert from Hadera as a bat mitzvah present. Although they are both “giant” Rihanna’s fans, Ronit believes the icon is a role model. “I love what she projects: power and confidence and not caving to violence. It’s a good example for us women,” she said.

Not everyone came for the music. “I came for the experience, I love superstar concerts,” said Simcha Yaso, an Ethiopian-born 23-year-old from Netanya, who also attended the Alycia Keys concert and flew to Berlin to see Beyonce.

Forever is how long it took the 25-year-old Barbadian singer to come out, forcing the crowd of about 50,000 people to wait two and a half hours till she showed up onstage at 10 P.M. – the show was meant to begin at 9, but most fans turned up early.

Under the blanket of a cloudy sky and balmy 70 degree weather, she stormed the stage. Her long high ponytail held aloft by a spiked metallic headband on her forehead – perhaps an (odd) ode to the Statue of Liberty. She began in a diaphanous black flowing jacket – a modest start after the Abu Dhabi mosque controversy? – but quickly removed it to reveal a black halter, bare midriff and half skirt contraption too complex to explain.

“Thank you Tel Aviv!” she said. “You know I love my friends all over the world, but it’s been too long since I’ve been back here in Tel Aviv.” She apologized for keeping the audience waiting – but her fans didn’t seem to mind.

Nor did they care when in “Pour it Up” instead of “All I see is signs / All I see is dollar signs,” she subbed in “All I see is Palestine,” or the fact that she just kept inserting calls of “Tel Aviv!” in every song – never once saying the word Israel.

The six-time Grammy winner didn’t get to her showstoppers until the middle of the concert, with “Umbrella” and “What’s My Name,” and finally removing the dastardly headpiece. Although she did her usual crotch slapping and butt squatting, the floor show was rather sparse, save some stage flames that erupted during “What Now,” one of the few ballads she sang (“I don’t know where to go / I don’t know what to feel / I don’t know how to cry / I don’t know why…”).

Before she ended the short 80-minute show with “Diamonds in the Sky,” she called out: “Tel Aviv, thank you for making tonight super-duper special! I will never, ever forget this night. I hope I will see you soon.”

Tel Aviv will probably come back for more.

For the original report go to http://www.haaretz.com/culture/.premium-1.553906