JLP Supporters Line up to Witness the Official Opening of Parliament

The Ceremonial Opening of Jamaica’s Parliament, Interview with Justice Bishop

Justice Bishop poses for Vision Newspaper's Hopeton O'Connor-Dennie on the steps of Parliament at the Official Opening of Parliament Thursday February 10, 2022. 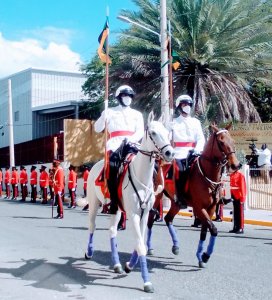 Police on horse back at the Ceremonial Opening of Jamaica’s Parliament , Thursday February 10, 2022

There was much pomp and pageantry at the Ceremonial Opening of Parliament.  Among the highlights was an interview that I had with Acting President of the Court of Appeal Justice Bishop. Her humility and candor were most touching.

Government has tabled a $912 billion dollars budget which is a 2 percent increase over 2021. This is referred to in economic terms as flat. This increase is with a view to focusing on education in an effort to help regain education some drain due to the losses as a result of the pandemic when schools were generally closed and education was by cyber space.

In his Throne Speech the GG stated that the government plans to have the name of Marcus Garvey cleared of criminal charges which from all reports were racially motivated. PM Holness and his Cabinet plan to approach the American government to attempt to have this done.

The President of Appeal, acting,  has been getting high marks on review, for her brilliance.  Donna Scott Mottley, Deputy Leader of Opposition Business has hailed her for her astute legal mind. I spoke to Scott-Mottley to get her views on the new acting president of the court of appeal. 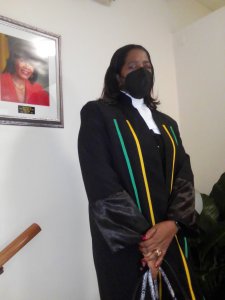 Justice Bishop poses for Vision Newspaper’s Hopeton O’Connor-Dennie on the steps of Parliament at the Official Opening of Parliament Thursday February 10, 2022.new acting President of the Court Of Appeal.

Mottley was responding to a question raised by Hopeton O’Connor-Dennie of Vision Newspaper as they left the Official Opening of Parliament Thursday, February 10, 2022.

“Her Honour Mrs. Bishop, is a sound judge and brings a breath of fresh air to the bench”

This respondent asked not to be identified.

Interview with the new acting President of the Court of Appeal

HD: What is your view of the new acting President of the Court of Appeal?

“The acting President of the Court of Appeal brings a lot of fresh thinking and brilliance to the bench. She is smart”

HD: Do you regard this elevation as your crowning achievement?

“No, I see this position as a opportunity to serve.  It is all about serving, Sir”

Continuing the acting President of the Court Appeal said:

HD:. Be reminded that “one day busha a busha”

“Yes! I have heard that said”

It was a most interesting interaction with Justice Bishop.  The newly installed head of the army Rear Admiral Weins Gorman was inspecting her first set of troops at the Parliament opening.  History was in the making.  It was a sight to behold. Horseback riders were a part of the pageantry.