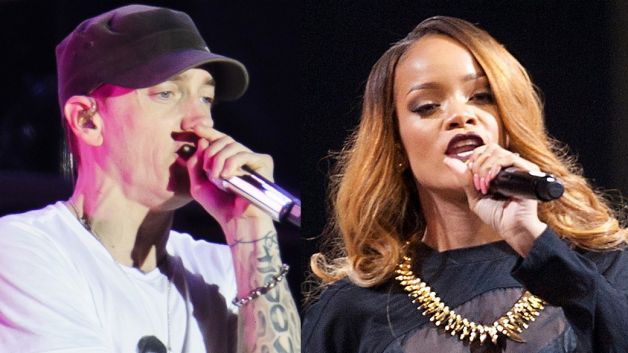 Just a week ahead of the release of The Marshall Mathers LP 2, Eminem unleashes the collection’s fourth single, a reunion with Rihanna called “The Monster” (#HappyHalloween).

Rih Rih opens the song — a cross between a Pixar movie, a dance track, and their last collaboration, “Love the Way you Lie” — with her signature unapologetic observations, “I’m friends with the monster that’s under my bed/ Get along with the voices inside of my head/ You’re trying to save me/ Stop holding your breath/ And you think I’m crazy/ Yeah, you think I’m crazy/ Well that’s not fair.”

Em then delivers a blow to the monstrosity of celebrity, “I wanted the fame, but not the cover ofNewsweek,” he laments. “Oh well, guess beggars can’t be choosey/ Wanted to receive attention for my music/ Wanted to be left alone in public, excuse me.”

And by the end — spoiler alert — he slays it, “Straw into gold? Chump, I will spin Rumpelstiltskin in a haystack,” but in a respectful, Kendrick Lamar “Control” kind of way, “I am nuts for real, but I’m okay with that/ It’s nothing, I’m still friends with the [monster].”

Speaking of Lamar, he’s the only rap feature on the album, which in addition to him and Rihanna includes Skylar Grey, British blues/rock singer Jamie N. Commons, and pop singers Nate Ruess (from fun.) and Sia (from Australia).

Prior to “The Monster,” Em released “Rap God,” a six-minute commentary on his lyrical prowess that was considered a friendly elbow to Lamar and raised the ire of LGBT community advocates; “Survival,” which came packaged with a video game; and “Berzerk,” which announced that Rick Rubin would be behind the boards for the set.

For the original report go to http://www.bet.com/news/music/2013/10/29/eminem-drops-the-monster-featuring-rihanna.html