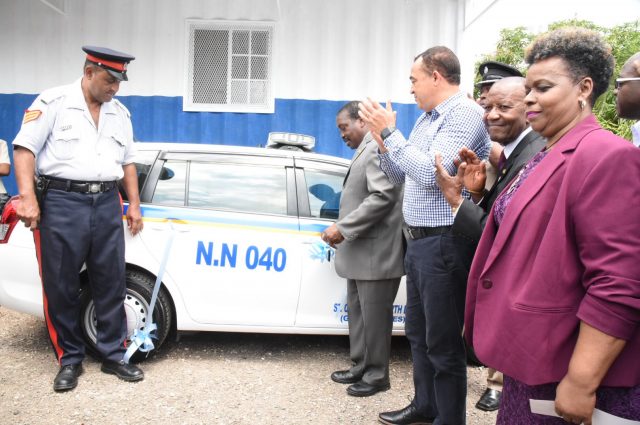 Minister of National Security, Hon. Robert Montague (4th right), along with Minister of Health and Member of Parliament for West Central St. Catherine, Dr. the Hon. Christopher Tufton (3rd right), applaud as the ribbon is cut for the new service vehicle assigned to the Green Acres Police Post which was opened recently. Others looking on from left are: Sergeant Michael Williams; Justice of the Peace, Joseph Parker; and Permanent Secretary in the Ministry of National Security, Dianne McIntosh.

The Green Acres community in St. Catherine, will be linking their Close Circuit Television (CCTV) system to the ‘JamaicaEye’ initiative operated by the Ministry of National Security.

Speaking at the recent opening of a Police Post in the community, President of the Green Acres Citizens Association, Kamau Kambui, said with the infrastructure already in place, the community was “ready to sign up to the programme.”

The public-private partnership is designed to network CCTV cameras owned by the Ministry as well as accommodate feed from privately owned CCTV cameras.

The feeds will provide useful footage in relation to criminal activity and other emergencies and will be monitored by a team of security professionals.

At the launch of the initiative on March 14, Minister of National Security, Hon. Robert Montague urged all Jamaicans to partner with the Government in providing surveillance footage in public spaces.

Meanwhile, Mr. Kambui said the citizens have welcomed the opening of the new police post stating that “we will continue to work with the (police) so that we can feel safe.”

For his part, resident of Green Acres, Reverend Futtreman White, told JIS News that the community was appreciative that the police post, as well as a patrol car have been assigned to the area.

“We all will make the officers who serve us, comfortable, and give them all the necessary support, and hope that they will perform as best as possible,” Reverend White said.

President of the St. Catherine Chamber of Commerce, Dennis Robotham, said with the police post now open, it will ensure that “crime takes a beating in this area.”

He added that with most business establishments already equipped with CCTVs, joining the national system, will be “more than an asset,” for crime fighting.